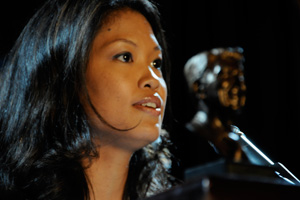 Photo courtesy of <a href="http://upload.wikimedia.org/wikipedia/commons/c/c7/Michelle_Malkin_2008.jpg">Wikimedia</a>.

When Alan Grayson called a female corporate lobbyist a “K-Street whore”—and was attacked as crude and sexist at the same time that he was lauded as gutsy and honest—he played a role in a familiar script: hero of the left (MSNBC’s Keith Olbermann, Bill Maher) attacks female villain (Hillary Rodham Clinton, Sarah Palin, Ann Coulter, Michelle Malkin) using sexist language. Progressive feminists soul-search about liberal misogyny. Mainstream media talk about sexism for 5 seconds. Then the media move on, and no one learns a thing. Repeat.

It happened again just two weeks ago, when Olbermann called Malkin a “big mashed-up bag of meat with lipstick on it” during the “Worst Person in the World” segment of Countdown. The creepily fleshy insult followed Olbermann’s rendition of Malkin’s e-mails, which he read in a Valley Girl voice to signal her presumed Barbie-doll vapidity. Megan Carpentier pointed out at the time, “A liberal, progressive critique of Malkin need not, and should not, resort to an attack on her looks or her gender or rely on silly stereotypes or imagery that brings to mind victims of domestic violence.”

Malkin, who is actually the worst person in the world, wasted no time decrying Olbermann’s sexist remarks. Needless to say, Malkin is not usually a passionate defender of feminism.

So there’s obvious problem No. 1 with leftist firebrands dipping into sexist imagery and language to bash conservative women: nothing’s more fun than highlighting the hypocrisy of your opponents. That’s why when a family-values conservative gets caught doing prostitutes, guys or underaged pages, it’s party time for progressives.

Olbermann’s gendered attack allowed the terrible Malkin, who called Clinton a “gyno-candidate” during the presidential primaries, to ascend the feminist high ground: “The ‘M’ in MSNBC stands for misogyny”, she happily announced on her blog.

Making themselves vulnerable to charges of hypocrisy is just one way that gendered attacks can hobble progressives. Grayson’s outburst also undermined his larger point, an essential one about K Street greed allowing a very bad person—Enron’s former chief lobbyist, who had attacked Grayson for trying to push an audit of the Federal Reserve—look like a victim.

Grayson’s comment helped conservatives in others ways. Since Grayson burst onto the scene, conservatives have been trying to tar him as an extremist on par with the town-hall screamers, Rush Limbaugh and Glenn Beck. It didn’t really work, because, you know, the things he was saying are actually true. But the backlash for his “whore” comment gave them the opening they needed to paint him as outside the mainstream.

Of course, Grayson’s remark was entirely within the mainstream. The casual use of misogynistic language pretty much pervades our entire culture, and no, progressives are not innocent.

And consider the plight of progressive feminists when political allies play pig. It puts us in the terrible position of having to stand up for anti-feminist women, like Palin. This story—prominent liberal attacks a woman who should be strongly criticized, using unnecessarily gendered language—was one of the themes of election ’08 (first with Clinton, then Palin)—and keeps rerunning. It’s sexist; we should know better. Certainly, it doesn’t seem to have much strategic value. In fact, it has the opposite of strategic value: It gives your awful opponents ammo with which to validly smear you. Whether that’s GOP lawmakers angling to delegitimize Grayson, or Olbermann giving attention-mongers like Malkin the ability to say, “See, liberals do this terrible thing. What hypocrites!”

So why does it keep happening?

As was often pointed out during the primaries, when Clinton garnered some horrifyingly sexist coverage (yes, in addition to a lot of very valid criticism), progressives who should know better resort to misogynist language because it’s still OK to be sexist.

That’s partly because gendered language is so deeply ingrained in our discourse that its impact is complex and difficult to parse out. If you spend a lot of time reading feminist blogs or sitting in gender-theory classes or generally thinking about this stuff, it’s obvious why a public official calling a woman a whore is out of line, even if it’s meant figuratively. As Adele Stan pointed out in a great blog post, “the sting of the word ‘whore,’ even when applied to me, is in the word’s inherent sexism.”

Sure, we want strong, aggressive, outspoken firebrands to counter conservative propaganda. But to be effective, that aggression need not involve putting down female conservatives by using language belittling to all women.

And for the record, this is not a plea for politeness.

I love that Olbermann stares down the camera and doesn’t back away from controversy. I love the loud, aggressive language deployed in the blogosphere. I call people names all the time. I also have no interest in spinning arguments about how men are naturally more aggressive, and how if women, with their purportedly angelic nature, took over, everyone would be much nicer.

Politeness is boring. Combating the insane lies propagated by conservatives in their efforts to derail a progressive agenda demands strong language. But you don’t have to be a wuss to avoid falling into the trap of sexism.