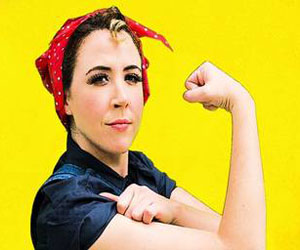 For more free Mother Jones podcasts, subscribe here or in the iTunes Store.

Sarah Haskins is a correspondent for Current TV’s “infoMania” where she stars in the recurring “Target Women” segments. Her brand of feminist comedy has made her a darling of the lady-blogs, where every new “Target Women” is eagerly anticipated. Before she became an internet celebrity, Sarah was a regular in Chicago’s famed improv circuit. The comedian sat down with Mother Jones to talk about cougars, cleaning products, and Michelle Obama.

Mother Jones: So Sarah, how did you get to be so funny?

Sarah Haskins: Many, many years of study. Also I hated being embarrassed, and that’s when you learn to tell jokes.

MJ: Of all the sketches you’ve done, what’s your favorite?

SH: Target Women segments generally target products and entertainment and ideas marketed primarily towards women. We make fun of those by using their own media and joking around with it. So for cleaning products, we amassed a bunch of cleaning commercials and looked at the themes that ran through them. One of the primary themes is that all these cleaning supplies are sexual and romantic substitutes. So the Swiffer comes to seduce the woman away from her old mop. The sponge has this sexy Spanish accent like Javier Bardem. They’re stand-ins for a husband and a satisfying adult sexual relationship.

MJ: Do you actually watch Lifetime and the WE network all day looking for this stuff or does it kind of find you?

SH: I’m lucky that if there’s something egregious, people who have been watching the show or other people in the office will suggest that I watch it and I don’t have to watch it alone. There are a couple of production assistants here, my editor Dylan Osbourne, and another production coordinator, so between the five of us we watch a lot of terrible, terrible TV.

MJ: I saw that you just tweeted, three minutes before our interview started, asking for a definition of “cougars.” How often do you crowdsource?

SH: This is one of the first times that I’ve done it. I’m asking because I’m watching the show The Cougar on TV Land about one cougar who in a The Bachelor style situation with 20 20-year-old guys. It’s completely ridiculous and hilarious, but the show doesn’t provide a definition of “cougar.” If a 30-year-old woman dates a 20-year old-guy, is she a cougar? I want to understand the cultural zeitgeist of cougardom. What’s your definition of a cougar?

SH: Yes, and do guys actually want that? Is there some status to getting a cougar?

MJ: I don’t know. Is this a potential piece?

SH: Yeah, this is a potential Target Women. Is she living the dream or is she living the nightmare? I don’t know about how I’d feel about living in a house with twenty 20-year-olds.

MJ: The problem is that any older woman gets classified as a cougar. Sarah Palin: mother of five, total cougar.

SH: It’s hard to know if that’s good thing or a bad thing. We used to just grow old and be spinsters. Now we have a lot of options: We can be spinsters or cougars.

MJ: One of the words that you reclaim in your comedy is the word “Lady.” The “ladies” are the group of women specifically targeted by marketing—the ones eating yogurt while watching Army Wives— but for you the word also becomes a term of solidarity and resistance. When did you start using the word “Lady”?

SH: I started using the word “Lady” as a joke, and to point out how some things are very obviously marketed to women and yet they don’t mention that. Like cleaning products—it’s so rare to see a guy in a cleaning commercial. Everything about the domestic sphere is still primarily aimed at women as if women were still, in every family, absolutely responsible for the care of the home, and working women didn’t exist. Other silly efforts to market at women include Sarah Palin. The Republicans so transparently chose her because she was a woman and there was this misguided idea that all the angry Hillary Clinton voters would flock to her.

MJ: Speaking of ladies and politics, what do think of the job First Lady Michelle Obama has done so far and how the media has portrayed her?

SH: Oh those arms right! I think Michelle Obama is fantastic and fantastically brilliant but it is difficult. We all saw what happened when Hillary Clinton came in as a First Lady and was very assertive and all the negative backlash from that. We have to remember that First Lady is not an elected position. It’s up to her to decide what to do, it’s not like there are actually responsibilities that come with it, constitutionally.

MJ: I found that Maureen Dowd column to be totally insincere.

SH: Which Maureen Dowd column because she’s driving me nuts in all of them! But I don’t think Maureen Dowd could make a straight point these days if she wanted to. Her tweeting column drove me nuts and I’m not even a wildly enthusiastic tweeter but I don’t think it’s the downfall of civilization because you can completely ignore it if you like whereas somehow I can’t seem to ignore Maureen Dowd!

MJ: I was wondering if you saw your work as journalistic. If an organization like Media Matters is dedicated to calling out conservative BS in the media, are you kind of like a feminist Media Matters?

SH: It’s great if that’s a byproduct of what I do, but I certainly don’t consider myself a watchdog—I’m more of a comedian first. But I don’t go out there with an axe to grind. I think that’s often something that can put you in a position of being really polarizing or coming across as sort of preachy. I try to avoid going out there on a mission specifically. I like it to happen more organically.