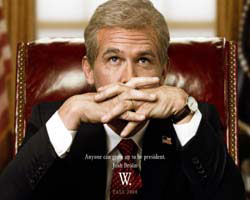 Director Oliver Stone has already profiled John F. Kennedy and Richard Nixon. Perhaps it was only a matter of time before he also tackled George W. Bush’s controversial presidency. In the reality-based biopic W., Stone tracks Bush from his drunken days in Texas to cabinet meetings in the White House. Josh Brolin, Bush’s alter ego under Stone’s direction, dominates the film in scenes that are plausible and funny, if not strictly factual. Some key moments are pure speculation, like Stone’s imagination of the closed-door meeting that decided Iraq’s fate. Others are joyful recreations of public gaffes, like awkward press conferences whose gravity Bush “misunderestimated.” In both personal and political relationships, Stone’s W. is a confused, frustrated man, whose insatiable hunger for his father’s approval drives him to make overly aggressive, emotion-based decisions. Bush the son, Stone suggests, has always wanted to escape his black sheep standing in a very white, aristocratic flock. No matter, it will never be enough. He can’t be Jeb. He can’t be Reagan. He can only ever be W.

Four MoJo staffers previewed W. this week and then discussed it via Gchat. W. opens nationwide this weekend.

Elizabeth: Brolin was really good, but some of the characters (Condi) were more like caricatures.

Elizabeth: I actually came away with a whole lot of respect for Poppy, and dare I say some understanding of Barbara, who until now I just thought of as a racist bag.

Jen: I liked Poppy too. And the Connecticut / Texas divide was emphasized, but I’d think it would color their interactions with each other.

Daniel: Did any parts of the movie strike you as wildly inaccurate?

Elizabeth: I wondered about the torture/lettuce lunch between Dub and Vice. There’s no way we know that’s how it went down.

Jen: Probably the way Bush says “I’m the decider” every 10 minutes. Also we have no way of knowing he had a panic attack alone in the woods. Or obviously his private conversations with Laura. And is his “favorite play” really “Cats?”

Elizabeth: I felt sort of hit over the head with obvious stuff, like the hazing/torture parallel. Stone didn’t want to leave the viewer to catch on to the ironies themselves, I guess.

Jen: Yeah, I also felt like Stone did a lot of winky stuff with the viewer. It was like he had to make sure people knew how clever he was being.

Elizabeth: Did anyone feel like they learned something new? I didn’t know (and I’m not sure I wanted to know) that Laura calls him Geo.

Jesse: I was pleasantly surprised they spent so much time on Bush’s failed reading initiatives as governor of Texas. (Go Randy Best!)

Jesse: I was surprised that stone wasn’t more cynical about Bush’s born-againness. Is it undisputed that Bush is really, truly a believer?

Jen: If he can believe there were WMDs in Iraq, why not that Jesus wanted him to be president? If nothing else, the movie demonstrated Bush’s ability to suspend reality indefinitely.

Elizabeth: It wasn’t a short movie, but as it ended I realized I was disappointed not to see anything re the 2000 election, 9/11 at the elementary school, or the Katrina response played out.

Jen: Yes, no Katrina! But I guess you have to edit when you have so many good (awful?) moments to choose from. I could easily see this as a Chicago-style musical, starring Mark Wahlberg as Bush and Parker Posey as Laura.

Elizabeth: Back to Katrina for a hot sec. That was such a f-up, and less trodden than the “My Pet Goat” disaster on 9/11 that Fahrenheit 9/11 illustrated. I guess giving us Katrina would be more of an advance on the story. WMDs and yellowcake to me feels like old news, especially when you’re timing your release two weeks before a presidential election.

Jesse: But it [the movie] didn’t really look at Bush’s second term at all, did it?

Elizabeth: No, it didn’t, which to me felt incomplete. My last thought? It was alright, but it certainly wasn’t better than “Cats.”

Jen: I also wish it would have taken us right up to the present. And yes, “Cats” might be better.

Jesse: You took the words right off my fingertips. That [When Laura gets Bush tickets to “Cats” to cheer him up] was the best moment in the movie, for me personally.

Elizabeth: He’ll [Bush] give up sweets for the troops but not “Cats?” What a tool.

Jen: Thanks, all, for Gchatting about W. Next time we’ll go see “Cats” instead, I promise.