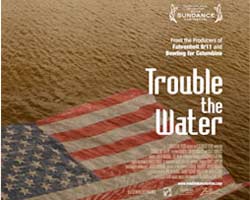 A few days before Hurricane Katrina struck land in New Orleans three years ago Friday, 24-year-old rapper Kimberly Rivers Roberts bought a camcorder for $20 on the street. With her husband Scott, she started filming her neighbors—most of whom didn’t have the means to leave—and their preparations to ride out the storm. She kept filming until the levees failed, even as the water rose and her friends sought safety in their attics. Two weeks later, Kim and Scott returned to document the destruction, and join some 20 friends in the back of a truck to begin the long trip to dry land. Kim and Scott’s footage, along with archival materials including recovered recordings of 911 calls and video of inmates trapped in the Orleans Parish Prison, makes for a film that is at once journalistic and deeply personal.

Kiera: First, a logistical question about the movie. How did Kim, Scott, and her friends get that truck that they drove away from New Orleans in? And what was their connection to the house they were staying in after the storm?

Nikki: Yeah, I found that distracting initially, but sort of forgot about logistics by the end. For me it didn’t detract.

Kiera: I almost think that sense of chaos was intentional.

Jesse: I would have liked to have seen what happened the night the police told them to stop filming on the one-year anniversary of the storm.

Nikki: Even more wrenching is that they seemed to see it coming. They weren’t surprised [that the police made them stop filming].

Daniel: That was sort of a theme.

Jesse: I also would have liked some resolution to the 911 rescue calls that were made during the hurricane. It would have been fascinating to track those calls and the people who made them.

Kiera: You guys wish any of the other people had been developed more?

Nikki: I liked that the filmmakers seemed more focused on this one couple’s story—they didn’t just focus on FEMA messing up or Bush messing up, which is the story you usually hear.

Daniel: And you got a sense of other people through their friends.

Jesse: The fact that it was Kim and Scott’s personal adventure made it an intimate experience—very much a home-video feeling.

Kiera: One of the devices in the film is the newscasts spliced into the home footage of people awaiting rescue. Impressions?

Daniel: I thought that was sort of amazing. The way [the newscasters] were all white and well dressed and so out of touch made it that much more intense.

Jesse: It created a nice dualism: This is what you see from your living rooms; this is what we see from our attics.

Nikki: Like the one where [newscaster] Julie Chen said something like, “All these people haven’t been saved, and also, how will gas prices be affected for everyone else?”

Jesse: I was struck by that gas-price line, too. On one hand, I thought, Wow, New Orleans is drowning and all we care about is a little bump in gas prices. But then I thought, Remember how confused everyone was in the aftermath? There was no good source for what was actually going on, and nobody really knew what the effects were going to be. And honestly, in some respect, gas prices was an appropriate story. It was just so harsh against the human suffering.

Kiera: That was some pretty heavy stuff, those juxtapositions. But the movie is being billed as uplifting.

Jesse: Uplifting? Not for me. Inspiring in these sense that it was so impressive what Kim and Scott were able to overcome.

Daniel: I had trouble with some of the music. It often was a little too connected to the scene, in a way that seemed a little trite. Like when they were waiting for their checks, and the lyrics of the song were like, “Waiting for my FEMA check, la-la-la.”

Kiera: Agreed. They hit us over the head sometimes.

Jesse: But when Kim found her recording [of her song “I’m Amazing”] and she started rapping—that was truly awesome.

Kiera: One thing I know: If ever there is a natural disaster, I want Kim on my team. But is anyone really that spunky all the time? Surely some meltdowns must have been edited out.

Jesse: I’m sure they worked it a little. But there’s no denying her energy.

Kiera: There was that one part when Scott is talking about how he stopped dealing drugs, and how the storm changed his perspective. Did that ring true for you guys?

Nikki: I think so. Even though both he and Kim were telling their stories on camera, I never got the sense they were saying anything for show.

Jesse: I can’t know that he didn’t go back to selling drugs at some point—but I don’t think that has much bearing on the truth of the feelings at this moment. I think what this moment shows is someone confronting and acknowledging his own failures.

Nikki: I woke up this morning with Kim’s “I’m Amazing” refrain in my head, which I think is a good sign.

Trouble the Water opened in select theaters on August 22.