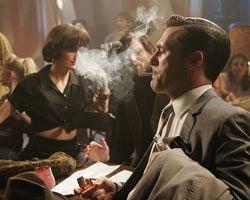 It’s early 1960, and the boys of Madison Avenue are in their glory years. They’re celebrated, well paid and, technically at least, happy—but far from content.

They gasp for air through cigarettes they inform the world are filled with tobacco that’s “toasted.” They baste their corporate wounds with 18-year-old scotch, and lots of it. For relief from their ritualized suburban marriages they turn to affairs with “office gals” who resent them and female clients who despise them.

They’re talented white, privileged Christian men who are suffocating. They rule an airless world that’s killing them. But they keep at it because their jobs, like the impending account for the Nixon presidential campaign, pay off like rigged slots.

Who were these guys? Matthew Weiner, creator of the TV series, described them as the men at the center of the U.S. economy, essential to commerce in war and peace. “When you can be that cynical about the machine and still be a part of it,” Weiner told Variety, “you have part of the definition of American character.”

The second season of Mad Men, the best dramatic series now on television, opens on July 27 on the American Movie Channel. (A DVD collection of the first season episodes was released in June).

When a dramatic series of this quality reaches U.S. television, it’s such a rarity that it has to have a backstory of its own. In 2004, Weiner approached the producers of HBO’s The Sopranos, and showed them an early version of Mad Men. It was good enough for Sopranos producers to hire him on the spot. They put him to work as a writer of the mob epic and as a supervising producer on thirty (out of a total of 86) episodes. Suddenly Weiner was working at the cutting edge of television, one of the rare dramatic narratives in the industry that was working free from network and advertising pressure and in which social criticism was actually valued. When Sopranos wrapped, HBO decided against producing Mad Men and Weiner took it to AMC, which was then trying to revive its ratings with original programming.

The theme that runs through every scene of Weiner’s series is the role of deception in the daily life of the U.S., from the grinding insincerities of the workplace to the systematic mendacity that keeps “the machine” operating on a grand scale. Weiner’s America in 1960 is a place where bullshit is a principle of social organization. Meanwhile, the society teeters on the brink of a catastrophically stupid war that will be sold as an advertising project now remembered as the Gulf of Tonkin provocation.

Weiner paints this world, the immediate predecessor to our own, with such tiny strokes of characterization and minimalist dialogue that each hour of narrative is self-contained and can easily be viewed on its own. But it’s necessary to see all of Mad Men to appreciate that this is a national portrait that penetrates to the backbone.

In the early episodes, the viewer is startled by unexpected details of memory of what it was like in the U.S. “before”—before women began to assert themselves, before casual anti-Semitism became unacceptable among Ivy Leaguers, before the rise of civil rights and gay pride—before everything. Office spaces are dotted with puce and turquoise ash trays shaped like internal organs; overhead lighting blinks out of stamped plastic baffles; female office workers move stiffly in crayon-colored wool dresses and men’s haircuts and suits are razored to a military stiffness. And always, everywhere (you can almost smell it). mass-market cologne cutting through the reek of booze and smoke.

When the cracks in this world start to appear, they come as shafts of light from another world—from the future that is our recent past. The light is most often cast by a woman struggling to make changes.

Office secretary Peggy (Elizabeth Moss) refuses to play the victim after a quick fling. She shows a gift for writing advertising copy that derives almost miraculously from her sincerity and refusal to treat other human beings like objects. Peggy is young, naïve and talented—and doomed. She watches wide-eyed as her work is stolen, gratefully runs to fetch ice for the scotch and worries about how to provide alibis to inquiring wives when the admen husbands return to the office after a long lunch, “greasy and calm.” Like the suburban wives, we can see her gathering energy for a rebellion even before she is aware of it herself.

Another shaft comes in the rebellion of the wives, led by the luminous actress January Jones, in a story line promised to pay off in the new season.

Another comes from a bohemian woman (a hipster but not yet a hippie) who rolls a joint and offers it to Don Draper, the principal Mad Man (Jon Hamm), who is emotionally a banked bed of hot coals. She tenderly hands it to him after refusing to let him sweep her off her feet with an expensive and lascivious weekend in Paris to be bought with a large bonus check. Her refusal—she just wants him for his body, she implies sweetly—demoralizes him. He signs over the check, stuffs it in the neck of her blouse and drives home to the dark house in the suburbs where his family is sleeping. He wakes his four-year-old son. “Ask me anything,” the ad man pleads. “I won’t lie to you.” When the boy complains that he’s tired, Draper presses him: “Ask me!” The boy, weakly: “Why do lady bugs light up?” Draper’s coals collapse into ash.

How can a narrative intentionally so elusive be so riveting? Maybe it’s the effort required to keep track of everything through the physical pleasure of observing it. It demands that the viewer toggle back and forth continuously between the past and the present, to become a witness to small acts of courage planted like seeds by people who are now remote from us in time and sensibility but so recent that in some sense they still are us. Or we are still them, the latest revised edition. We are reminded again and again: This is what things were like in 1960 and what they could be like again—or worse.

As a genre, this feels like something new. It’s not historical fiction, exactly; it’s more like historical science fiction, a world in which time bends out in all directions and flows back to the viewer as an explanation of how things have gone so terribly wrong. How propaganda as thick as tobacco smoke still hangs on in an airless world that’s killing the rest of us.