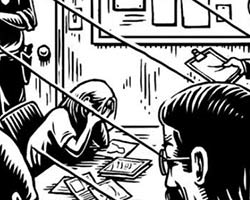 In 2004 Steve Kurtz, associate professor of art at SUNY-Buffalo, was preparing for an art installation examining the risks of genetically modified foods. Then his wife died suddenly in the middle of the night. When police arrived, they latched onto bacteria cultures lying around the house, an invitation to an art show with Arabic writing, and foil Kurtz hung over his windows to shield out the daylight. Even after the FBI declared Kurtz’s bacteria harmless to humans, and coroners ruled that Kurtz’s wife died of natural causes, both Kurtz and Dr. Robert Ferrell—a professor of genetics at the University of Pittsburgh who supplied Kurtz with the bacteria—were charged with wire and mail fraud. In October, Ferrell, who has experienced multiple strokes since the charges were brought against him, pleaded guilty to lesser charges to avoid a prolonged federal case and possible prison time. Kurtz’s case is still pending in federal district courts.

Strange Culture examines the absurdity of the case through a blend of documentary and fiction—actors reenact key events, and their unscripted commentary has been incorporated into the film. At Kurtz’s request, Oscar winner Tilda Swinton was recruited to play his wife. Kurtz and legal experts appear for interviews, but Ferrell declined to participate because of the sensitive nature of the case, so the film itself is a product of the limits to free speech engendered by the litigation. This irony has not been lost on the film’s creator, Lynn Hershman Leeson, an artist herself. “Artists are our canaries in the coal mines,” she says. “If they’re repressed, then everyone else is, too.” The ultimate danger, Leeson says, is when that repression turns into self-censorship.

Mother Jones: Kurtz and Ferrell’s case is still ongoing in the federal courts. Why did you want to make the film before the case was resolved?

Lynn Hershman Leeson: I wanted to help Steve. I felt that it would take getting people the information in order to allow them to know what was going on and possibly do something about it. I wasn’t interested in documenting this after it happened. I really wanted to make it into an activist work of information and change, and help shift the balance of the criminal charge. Steve’s defense fund is also using the film to hold fundraisers around the world.

MJ: Did you have to edit the film so as not to interfere with Kurtz’s court case?

LHL: I did, because the film addresses such a sensitive subject. We had to have it vetted by a number of attorneys. Twenty minutes of material were cut out because the attorneys felt they might jeopardize the case itself or Steve’s testimony. We had to be extremely careful and work within those roles.

MJ: What kind of themes do you focus on in your art projects?

LHL: My themes are usually about empowerment and freedom of speech. My next film is about the history of feminist art and the struggle that women had to endure to show their art. All the work is about personal empowerment and the autonomous nature of people. My next show, which is a photo series called Found Objects, is based on a sex doll made to look like Manet’s Olympia. It’s a comment on how women are treated and objectified in our culture.

MJ: So Strange Culture isn’t really a departure from the themes you normally address.

LHL: It’s more of a departure stylistically, but it follows themes I’ve been interested in—censorship, freedom of expression.

MJ: Why did you decide that this blend of fictional drama and facts was the form best suited to the story you were trying to tell?

LHL: It wasn’t predetermined. When I was shooting, I found what the actors were saying offscreen more interesting than the scripted material. The actors were bringing more passion than the film was asking.

MJ: Ordering bacteria over the internet is a normal procedure for scientists, students, and researchers. How do you think that potential criminalization will affect research and art?

LHL: Certainly in the art world people aren’t doing this kind of work because they’re looking at what happened to Steve.

MJ: If the FBI had discovered the bacteria at the art exhibition rather than in his house, would that have changed anything?

LHL: I don’t think that would make any difference. The circumstances were suspicious because they found a dead body in Steve’s house, but the government changed the charge fairly quickly. And they still haven’t let this go. They’ve also subpoenaed other artists in art contexts, for instance at museums. When Steve showed at the Whitney, the FBI was there looking at everything.

MJ: Steve’s art exhibition obviously pointed fingers at the big agriculture industry, which receives a lot of government support. How much do you think this subject matter played into Steve’s role as a target for the FBI?

LHL: Peter Coyote, who plays Dr. Robert Ferrell in the docudrama, thought that that was at the base of it. I don’t know what evidence they have, but I think it was a combination of things that the government didn’t want made public, one of which was revealing that it’s illegal to know what we’re eating.

MJ: How is our current political climate, and the Patriot Act, different from what artists have experienced in the past?

LHL: There was McCarthyism, but it has reached a different level now. It’s not just celebrities and politicians. A number of people who worked on the film have been getting tax audits serially. There’s also been wiretapping: The FBI showed up to places where Steve had mentioned he would be in phone conversations. Everyone is afraid to challenge the establishment.

MJ: There’s a potential to set a serious precedent for our interpretation of the law if this case makes it to the Supreme Court. How real is the danger of the government widening its scope and definition of illegal activities?

LHL: The government has spent a lot of money on the case, and they have to go through with it. They had to find something, and these fraud charges are basically what they were able to come up with. They have taken something that was a civil charge, sending something across the Internet without a proper form, and criminalized it. I think this will have enormous ramifications on what the government can do to people for making simple, explainable mistakes.

MJ: Is Steve still working on art projects despite the resistance he is encountering here?

LHL: He worked on a project in Australia recently with a tissue-culture lab.

MJ: Are other countries willing to exhibit dangerous or controversial artwork because they have a lower perception of risk than what Americans have had to become accustomed to?

LHL: People are shocked this is happening in the United States, particularly to an artist. I showed this at Sundance, and the thinking was that people wouldn’t understand this beyond the United States. But when I showed it at the Berlin International Film Festival, the audience there was even more responsive and outraged that this was happening.

MJ: Have you considered leaving the United States?

LHL: I’m happy here. I’m still doing my work, but I was never doing the kind of work that Steve or other “bioartists” were doing. I want to be somebody who is creative in asking the questions in the Unites States that we need to ask in order to maintain our civil liberties.

MJ: Are other artists leaving the United States?

LHL: Many American artists are doing their work in Europe or Australia because they can do that work there without question. But there’s still the matter of showing it here.

MJ: You’ve been screening your film on the festival circuit. What have audiences’ reactions been like?

LHL: They’re positive, but they’re also horrified. I just showed it in London, and an American citizen in the audience was in tears by the end.

MJ: Will you follow up with another film on Steve’s case after it has been resolved?

LHL: I think other people will be making films to follow up on what the actual jury does. That wasn’t my intention. My intention was do to this as an activist, live event to be viralized rather than documented.

Image shown above is a publicity drawing for the film. Strange Culture is currently available on DVD through Docurama Films.