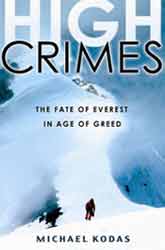 High Crimes: The Fate of Everest in an Age of Greed,
By Michael Kodas

That Everest is a dangerous place should surprise no one. Whisper-thin air, skyscraper-deep crevasses, and deadly storms that build in minutes have given Everest and its “Death Zone” an infamous reputation. But that the world’s tallest mountain is host to thieves, frauds, and extortionists who wreak more mayhem than the elements is a less-trodden story. Enter High Crimes, Michael Kodas’ new book, in which the writer and sometimes mountaineer (he’s a reporter for the Hartford Courant who has attempted twice to summit Everest) whisks through dozens of horror stories; of hoodwinked climbers abandoned by inexperienced guides, desperate summiters whose lifesaving gear was stolen, and dying climbers stepped over and abandoned by dozens of peakbaggers. “Everest,” explains one guide, “makes people grow horns.”

In preparation for the Olympic Games this summer, China has paved a more than 65-mile stretch of road leading climbers straight to the mountain’s door. This ease of access (reaching the Nepalese base camp, in contrast, involves a 35-mile, several day hike) coupled with Chinese climbing permits that cost a fraction of what they do in Nepal ($10,000 vs. up to $30,000) has given rise to a largely lawless mountain outpost. Kodas describes scores of mountaineers carrying large wads of cash spending weeks of idle time at base camp, spilling cash and killing time in makeshift brothels, bars, and gambling outfits. While the wait is often part of the mountaineering equation—the weather is only prime for summit bids on a handful of days each year—the atmosphere at base camp is less preparatory and more “Wild Wild East.”

The mayhem continues on the mountain itself, where tents are regularly looted of basic yet vital equipment—stoves, tents, ropes, and once a high-end battery that powered a Discovery Channel production—leaving climbers stranded and vulnerable. Some of the most lethal scams involve the very technological advance that allows the hundreds of relatively novice climbers to attempt the mountain each year: bottled oxygen. That industry is cottage and largely unregulated, and at up to $600 per, Kodas explains, there are millions to be made. Sellers may promise top-quality systems fortified with dry Russian air, while instead selling recycled bottles filled with local (humid) air, so that the moisture causes the apparatuses to fail at high altitudes.

Other scams involve hucksters who claim to be making environmental summits to clean trash from Everest—the paths leading to the peak are notoriously littered with empty oxygen containers, discarded gear, and even frozen corpses—but are merely running cons in order earn hundreds of thousands of dollars in sponsorships. Kodas tells of one 1998 team that boasted of removing 157 oxygen bottles, only to admit later that they had brought 136 of the bottles for their own personal use. Even Sherpas—the unsung heroes of most every ascent on Everest since Tenzing Norgag and Edmund Hillary’s summit in 1953—have become part of the corruption equation, demanding more money of strapped climbers mid-climb, stealing equipment or money at base camp, and essentially capitalizing on what has become a high-stakes, high-end gamble of an industry.

Kodas doesn’t shy from citing specific bad actors, including an irresponsible (and under-skilled) guide who duped a wealthy American into a trip to the summit, only to abandon him in the end for his own summit bid. He also relates in intrepid detail the very personal story of his own second summit attempt, one wrought with its own guide shenanigans and hi-jinx. The book is as juicy as a gossip tabloid, and certainly the guides who are named by name will have a thing or two to say about it. But the work is philosophical at root, revealing how an endeavor as seemingly straightforward as a climb to the top of a mountain can devolve into a series of grueling human battles not unlike those one might encounter on the most harrowing of city streets.