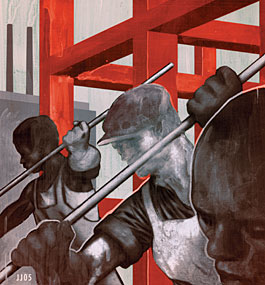 When space aliens arrive to colonize us, race, along with the Atkins diet and Paris Hilton, will be among the things they’ll think we’re kidding about. Oh, to be a fly on the wall when the president tries to explain to creatures with eight legs what blacks, whites, Asians, and Hispanics are. Race is America’s central drama, but just try to define it in 25 words or less. Usually, race is skin color, but our visitors will likely want to know what a “black” person from Darfur and one from Detroit have in common beyond melanin. Sometimes race is language. Sometimes it’s religion. Until recently, race was culture and law: Whites in the front, blacks in the back, Asians and Hispanics on the fringes. Race governed who could vote, who could murder or marry whom, what kind of work one could do and how much it could pay. The only thing we know for sure is that race is not biology: Decoding the human genome tells us there is more difference within races than between them.

Hopefully, with time, more Americans will come to accept that race is an arbitrary system for establishing hierarchy and privilege, good for little more than doling out the world’s loot and deciding who gets to kick whose butt and then write epic verse about it. A belief in the immutable nature of race is the only way one can still believe that socioeconomic outcomes in America are either fair or entirely determined by individual effort. These two books should put to rest any such claims.

If race is real and not just a method for the haves to decide who will be have-nots, then all European immigrants, from Ireland to Greece, would have been “white” the moment they arrived here. Instead, as documented in David Roediger’s excellent Working Toward Whiteness, they were long considered inferior, nearly subhuman, and certainly not white. Southern and eastern European immigrants’ language, dress, poverty, and willingness to do “nigger” work excited not pity or curiosity but fear and xenophobia. Teddy Roosevelt popularized the term “race suicide” while calling for Americans to have more babies to offset the mongrel hordes. Scientists tried to prove that Slavs and “dagoes” were incapable of normal adult intelligence. Africans and Asians were clearly less than human, but Hungarians and Sicilians ranked not far above.

It gives one cultural vertigo to learn that, until the 1920s, Americans from northern Europe called themselves “white men” so as not to be confused with their fellow laborers from southern Europe. Or that 11 Italians were lynched in Louisiana in 1891, and Greeks were targeted by whites during a 1909 Omaha race riot. And curiously, the only black family on the Titanic was almost lost to history because “Italian” was used to label the ship’s darker-skinned, nonwhite passengers.

Yet it was this very bureaucratic impulse and political self-interest that eventually led America to “promote” southern and eastern Europeans to “whiteness.” The discussion turned to how to fully assimilate these much-needed, newly white workers and how to get their votes. If you were neither black nor Asian nor Hispanic, eventually you could become white, invested with enforceable civil rights and the right to exploit—and hate—nonwhites. World War II finally made all European Americans white, as the “Americans All” banner was reduced to physiognomy alone: Patriotic Japanese Americans ended up in internment camps while fascist-leaning Italian Americans roamed free. While recent European immigrants had abstained from World War I-era race riots, racial violence in the 1940s was an equal-opportunity affair. One Italian American later recalled the time he and his friends “beat up some niggers” in Harlem as “wonderful. It was new. The Italo-American stopped being Italo and started becoming American.”

While European immigrants got the racial stamp of approval, the federal government was engaged in a little-recognized piece of racial rigging that resulted in both FDR’s New Deal and Truman’s Fair Deal being set up largely for the benefit of whites. As Ira Katznelson explains in When Affirmative Action Was White, these transformative public programs, from Social Security to the GI Bill, were deeply—and intentionally—discriminatory. Faced with a de facto veto by Southern Democrats, throughout the 1930s and 1940s Northern liberals acquiesced to calls for “states’ rights” as they drafted the landmark laws that would create a new white middle class. As first-generation white immigrants cashed in on life-altering benefits, black families who had been here since Revolutionary times were left out in the cold.

Disbursement of federal Depression relief was left at the local level, so that Southern blacks were denied benefits and their labor kept at serf status. In parts of Georgia, no blacks received emergency relief; in Mississippi, less than 1 percent did. Agricultural and domestic workers were excluded from the new Social Security system, subjecting 60 percent of blacks (and 75 percent of Southern blacks) to what Katznelson calls “a form of policy apartheid” far from what FDR had envisioned. Until the 1950s, most blacks remained ineligible for Social Security. Even across the North, black veterans’ mortgage, education, and housing benefits lagged behind whites’. Idealized as the capstone of progressive liberalism, such policies were as devastatingly racist as Jim Crow.

To remedy this unacknowledged injustice, Katznelson proposes that current discussions about affirmative action refer to events that took place seven, rather than four, decades ago, when it wasn’t called affirmative action but business as usual. He’s frustrated by the anemic arguments of his liberal allies, who rely on the most tenuous, least defensible of grounds—diversity—while their opponents invoke color blindness, merit, and the Constitution. In short, affirmative action can’t be wrong now when it was right—and white—for so long.

Together, these two books indict the notion of race as, ultimately, a failure of the American imagination. We simply can’t imagine a world in which skin color does not entitle us to think we know what people are capable of, what they deserve, or their character. We can’t imagine what America might become if true affirmative action—not the kind aimed at the Huxtable kids but at poverty and substandard education—was enacted at anywhere near the level once bestowed on those fortunate enough to be seen as white.