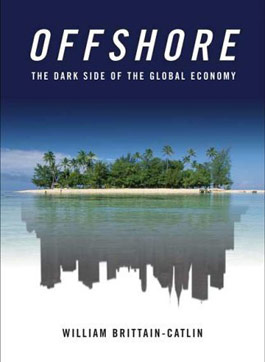 Question: What do Apple Computer, Enron, and Al Qaeda have in common? Answer: They’ve all mastered the art of using offshore money havens to raise funds on the sly, shield their assets, and free themselves from the web of international financial oversight. As former investigator William Brittain-Catlin puts it in this eye-opening book, “In our offshore world, secrecy has become the new freedom,” enabling companies to exist almost as accounting fictions, unbound by the demands of the state.

Offshore centers on the Cayman Islands, long known for its “no questions asked” policies. Here’s how a typical Cayman tax dodge, once used by Apple, worked: An Apple subsidiary in Singapore would build a Mac and “sell” it for $200 to an Apple front company in the Caymans, which then resold it to an American Apple dealer for $1,000. All told, Apple would make $800 in profit, but most of that would go to the front company, which paid no U.S. taxes. (The IRS caught on to this scheme, and in 1994 Apple forked over $114 million—not even half of what it owed.) Enron used a far more intricate array of tricks to hide its misdeeds from the prying eyes of regulators and analysts. With the help of nearly 700 holdings in the Caymans, between 1996 and 2000 it paid only $17 million in taxes on profits of $2 billion.

Nevertheless, even the Enrons can’t move offshore entirely: They still need the feds to provide corporate welfare and bail them out when they’re broke, even as their financial evasions deplete the tax base. Meanwhile, companies that play by the rules are unable to keep up with their tax-evading competitors, creating added incentive to funnel profits into foreign tax havens. After 9/11, the Bush administration realized that Al Qaeda could play the offshore game as well as anyone, and promised to clean up “the dark side” of international finance. But it’s done little to rein in those companies that don’t mind their offshore profits going back to Washington, so long as they end up in the right pockets.