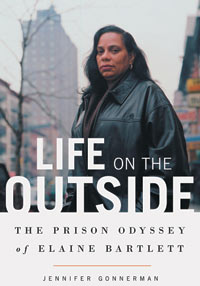 There is no more unsatisfying read than this book. Nothing much happens,
no one learns anything, no conflicts are resolved, and few characters are even likable. The guilty
escape punishment. Haplessness is treated like venality, cluelessness like malice, treachery
like heroism. Unresolved trauma and clinical depression leap from every page. The book ends as
it begins, poised on the edge of the next calamity, the next boneheaded decision, the next missed
opportunity. At times, Life on the Outside makes you want to swear off non-fiction and take up residence
in Danielle Steel’s world, because Jennifer Gonnerman gets it right. With sharp reporting, she
captures the merciless grind of one woman attempting to reintegrate into society after serving
a draconian drug sentence. Her book should take its place among such classics of urban sociology
as DuBois’ The Philadelphia Negro, Fox Butterfield’s All God’s Children, and Carol Stack’s All
Our Kin.

In early November 1983, 26-year-old Elaine Bartlett, high-school
dropout and welfare mother of four, agreed to carry four ounces of cocaine upstate for a drug dealer
she thought was a friend. Though she lived hand-to-mouth, the $2,500 lure was partly to fund a lavish
Thanksgiving family fete in her Harlem project apartment. But that dream evaporated when state
troopers stormed the hotel room that police informant George Deets—the dealer she knew
as Charlie—had procured for the transaction. Bartlett, with no criminal record and no ability
to produce the $250,000 bail, ate her turkey dinner on lockdown.

Nathan Brooks, petty drug dealer and father of her two youngest children,
having failed to dissuade Bartlett from the scheme, did the only thing he could think of: With gallant
foolishness, he went along on the drug deal to protect Bartlett. But he ends up providing the book’s
first opportunity to sigh at the poignant futility of such lives: Nine weeks after the bust, Albany
County Judge “Maximum” John Clyne dourly married the couple in his chambers, moments before sentencing
them in his courtroom.

Because of New York’s Rockefeller drug laws, Elaine’s childish irresponsibility
cost her 20 to life, Nathan’s defeatist chivalry a minimum 25. These two self-destructive fools
were treated like drug kingpins, yet they couldn’t even afford lawyers. (Meanwhile, George Deets,
the insatiable addict whose drug ring was responsible for a biweekly kilo of cocaine on New York’s
streets, remained not only free but well paid by the police and with his inventory restocked.)

Sixteen years later, as a result of ever-increasing calls to
overturn mandatory minimums for low-level offenders, Bartlett experiences the only stroke of
luck in her benighted life: She receives clemency from Governor George Pataki, leaves Bedford
Hills prison, and returns home to New York City as a poster child for sentencing reform.

It’s all downhill from there. Gonnerman wryly subtitled this book about
life after long-term incarceration a “prison odyssey” because, as Bartlett soon realizes, she’s
simply “left one prison to come home to another.” One in the flood of 600,000 prisoners released
each year from our 30-year incarceration boom, Bartlett returns to an overcrowded, filthy project
apartment and the four children who have grown up in her absence.

Reporting originally for the Village Voice, Gonnerman spent myriad
hours shadowing Bartlett as she attempted to rebuild her life and her relationships with her children—all
while lacking the life skills to manage her money, handle on-the-job conflict, or even use her health
benefits. Unfairly demoted at her new job as a drug-treatment-center aide, Bartlett begins to
show up inappropriately dressed and sullen—self-destructive protests, to be sure, but
a far sight better than the penchant for fisticuffs she struggles to curb.

Humiliated by the brusqueness of the parole officer Bartlett now shares
with her son Jamel (we pause here for that second sigh), she narrowly escapes returning to prison
for refusing to cooperate with simple, though infantilizing, rules. Still, Bartlett is our best-case
ex-con: not criminal by nature. College educated (albeit while in prison). Hardworking. Smokes
dope but doesn’t drink or do hard drugs. Concerned, if clueless, mother. Consciously engaged in
self-improvement. And yet, we’ve failed her. We’ve left her to flail alone through the rest of her
life between the anti-drug-law rallies she neglects her job to attend.

This book should be unsatisfying—we are still chronicling our
failure either to prevent crime caused by lack of opportunity or to rehabilitate offenders. We
spend $55 billion annually imprisoning our fellow citizens but only $100 million transforming
them back into productive citizens. Nearly two-thirds are rearrested within three years—often
because of minor parole infractions. Ex-cons are often denied access to public housing, the right
to vote, student loans, a driver’s license, parental rights, or welfare benefits. Given the low
educational levels and high frequency of mental illness in this population, one wonders what our
true aims are in this regard beyond keeping our jails full. Tales such as Bartlett’s highlight
what should be fatal flaws in the system.

We leave Elaine in mid-2003, in the fourth year of her release, having
just been fired from her overtaxing, underpaid job and pouring more energy into her work as an anti-Rockefeller-drug-law
activist. Jamel is, yet again, in jail; he became harder to monitor once they stopped sharing
that parole officer. Only her oldest, Apache, has steadfastly avoided trouble. He builds his life
around coaching basketball. Both daughters flit about the edges of the criminal underworld leading
lives of not-so-quiet desperation. Bartlett has three grown children headed nowhere fast. She’s
46 and living in public housing. Her refrigerator is usually empty, or nearly so, and she’s still
living hand-to-mouth. But at least she has managed to stay out of jail. So far. Gonnerman, bless
her heart, calls that a triumph.