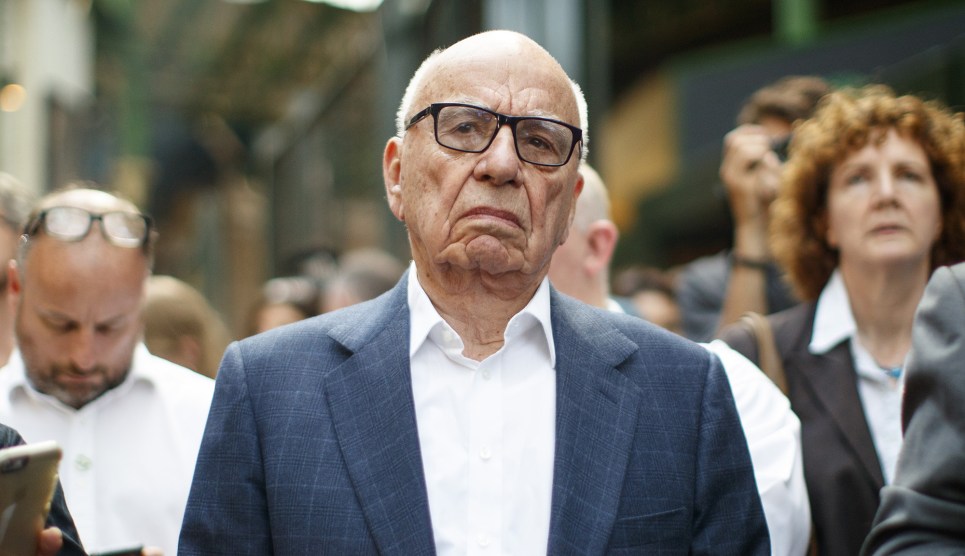 Why have we let this man destroy our country? For God's sake, a Bond villain was based on Murdoch! What more warning do you need?Tolga Akmen/London News Pictures via ZUMA

Seth Rich is one of the best examples of how Fox News doesn’t operate as a legitimate news outlet. Rich, as you might recall, was a DNC staff member who was killed in the early morning in Washington DC, probably as the result of a botched robbery, and that’s how every other news outlet reported it. But not Fox. They insisted on peddling an insane conspiracy theory that Rich had leaked DNC emails and been targeted for murder because of that. The Rich family finally got tired of the lies and sued, but just before Sean Hannity and Lou Dobbs were about to testify in the case, Fox settled for millions of dollars.

This is all sleazy enough, but Ben Smith reports that there’s more:

There was one curious provision that Fox insisted on: The settlement had to be kept secret for a month — until after the Nov. 3 election. The exhausted plaintiffs agreed.

Why did Fox care about keeping the Rich settlement secret for the final month of the Trump re-election campaign? Why was it important to the company, which calls itself a news organization, that one of the biggest lies of the Trump era remain unresolved for that period? Was Fox afraid that admitting it was wrong would incite the president’s wrath? Did network executives fear backlash from their increasingly radicalized audience, which has been gravitating to other conservative outlets?

The unusual arrangement underscores how deeply entwined Fox has become in the Trump camp’s disinformation efforts and the dangerous paranoia they set off, culminating in the fatal attack on the Capitol 11 days ago. The network parroted lies from Trump and his more sinister allies for years, ultimately amplifying the president’s enormous deceptions about the election’s outcome, further radicalizing many of Mr. Trump’s supporters.

Smith goes on to say that members of the legitimate media have been beating themselves up over minor aspects of their reporting while ignoring the elephant in the room: Fox News.

As we in the media reckon with our role in the present catastrophe, Fox often gets left out of the story. You can see why. Dog bites man is never news. Fox’s vitriol and distortions are simply viewed as part of the landscape now.

….And so let me take a break from beating up well-intentioned journalists and even the social media platforms that greedily threw open Pandora’s box for profit. There’s only one multibillion-dollar media corporation that deliberately and aggressively propagated these untruths. That’s the Fox Corporation, and its chairman, Rupert Murdoch; his feckless son Lachlan, who is nominally C.E.O.; and the chief legal officer Viet Dinh, a kind of regent who mostly runs the company day-to-day.

Fox News—not social media, not think tanks—is the primal source of racism, xenophobia, polarization, and reckless lying in American media. Until we somehow put a stop to this, it will be hard to ever recover the country we used to have. Not a perfect country by any stretch, but at least one where we all had a roughly similar idea of what was true and were willing to talk openly about it. Rupert Murdoch has earned billions of dollars for destroying American politics, and he’ll keep doing it until the money hose goes away. Let’s start turning it off.