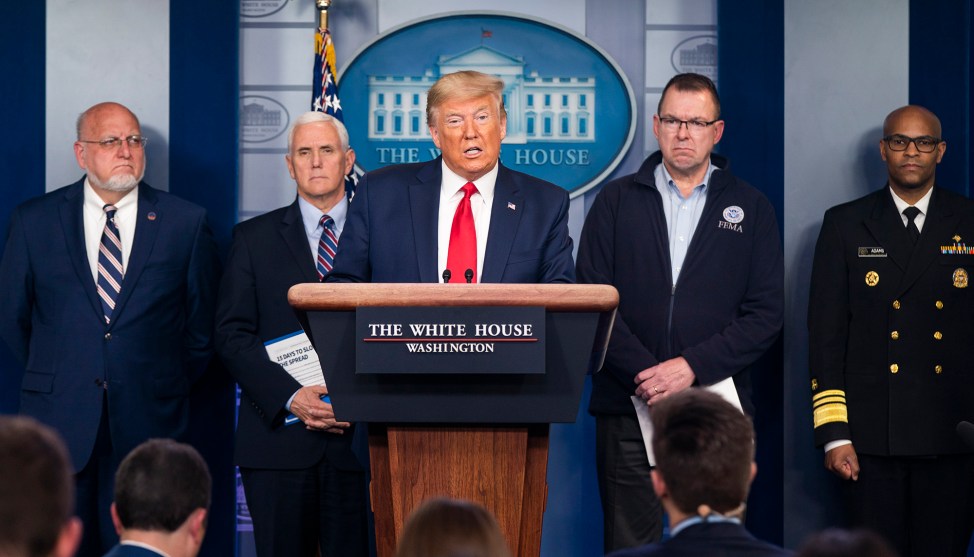 He has been agitated that he can’t run the campaign he wants against Democrat Joe Biden, and he has used daily, hour-long briefings as near proxies for his campaign rallies, guaranteed to attract attention and to maintain the backing of his fervent political base.

While some around him have suggested that he should only appear when there is big news to announce, Trump has been missing the spotlight and has told people that he knows the nation is watching the briefings and doesn’t want to give up the stage. On Sunday, he asked the briefing, originally slated for 4:30 p.m. to be pushed back later into the evening, when more people would be watching — including those tuning in for “60 Minutes,” the president’s favorite broadcast news magazine.

On Saturday, Trump used his platform to tout the use of hydroxychloroquine as a therapy against coronavirus, despite the lack of evidence that it works. The result is that people who need it for other illnesses can’t get it because Trump fans are hoarding it. A man died after ingesting chloroquine phosphate, an additive commonly used at aquariums to clean fish tanks. And people returning from Peace Corps duty, some of whom need it as an antimalarial drug, have to do without.

On Sunday Trump said once again that we didn’t even know about the coronavirus because China waited so long tell us about it. This is false. China hardly deserves any kudos for their handling of the initial outbreak in Wuhan, but Trump was being briefed about it in January. Everyone knows this. Asked why he stood by while Trump lied about this, Anthony Fauci said in frustration, “I can’t jump in front of the microphone and push him down.”

Over the weekend Trump also announced that Ford and other carmakers are already manufacturing ventilators. This is, yet again, flatly untrue.

And of course Trump has consistently used his stage time for happy talk, suggesting that the pandemic will have a short lifespan and cause minimal damage. As a result, while Democrats have taken it seriously from the start, a large number of Republicans still don’t:

I could go on, but I hardly need to. The bottom line is that Trump’s daily briefings are (a) run like campaign events, and (b) full of falsehoods, including some that can be deadly.

Believe me, I understand why cable networks feel like they have to broadcast these press briefings live. Trump is the president of the United States in the middle of a horrific pandemic. Of course you broadcast them. But eventually, in the cause of informing the public fully and truthfully, this has to stop. Reporters need to sit through the briefings, decide what’s important, verify it with other administration sources, and then put it on the air. This will take only a little extra time and will endanger no one. Given Trump’s dangerous track record of distortion and fabrication during these briefings, it’s the only prudent option.