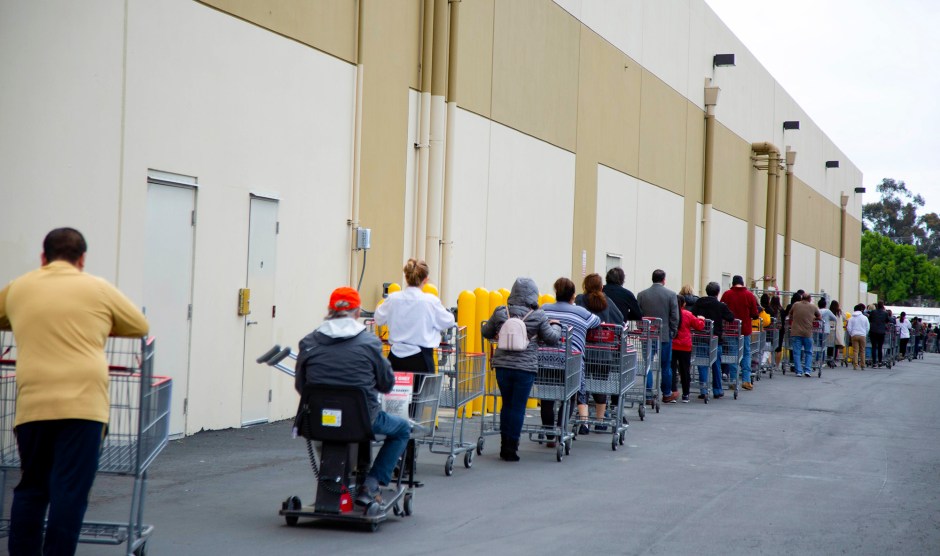 A reader emails me with a complaint after reading about the very generous unemployment benefits in the coronavirus rescue bill:

I would like to draw attention to a major flaw in the unemployment formula. I work in a grocery store, the epicenter of panic and the only place people can congregate—and believe me, they congregate. I’m deemed an essential worker. Basically if I don’t go to work, society collapses and you all starve (hyperbole, maybe? Maybe not).

I bring home between $550 and $650 a week. If I were laid off, I would be bringing home over $850. How is that fair? Why should we put our lives at risk for people who can’t stay home even when the government pays them to? Why shouldn’t we shut the grocery stores?

That’s a very good question, isn’t it? Back in 2009, a similar question paralyzed action during the Great Recession. From a macroeconomic point of view, giving mortgage relief to households would have been a very good idea. But at a personal level, people objected to the idea of doling out cash to homeowners who had lied about their income when they bought a big house or used a refi to install a shiny new kitchen. Why help them when those of us who had been prudent weren’t getting anything?

This is very much the same. The broad economic goal of the unemployment expansion is to give lots of money to people who are likely to spend it, which is those with low incomes. But on a personal level, that feels deeply unfair. Why should they get more than me just because they got laid off and I didn’t?

The best answer I have is that giving in to that sense of resentment turned out to be a terrible idea back when mortgages were at the heart of an economic meltdown. We should have sucked it up and doled out the cash even though it felt unfair in some cases. It’s now eleven years later, and hopefully we’ve learned our lesson: this time we’ll dole out the cash in the most efficient and targeted way possible even if it feels unfair in some cases.

On a personal level, the best I can say is that there’s a lot of luck inherent in life. Sometimes you’re the lucky one and sometimes you’re not. In the great scheme of things, this is a fairly minor and temporary bit of luck and I can hardly begrudge it to people who have been on the short end of the stick their entire lives.

BY THE WAY: This is why I’m not a politician. I’m sure this answer would convince no one who lacks pointed ears. But I’ll bet Bill Clinton could whomp up something good in a few minutes of free time.