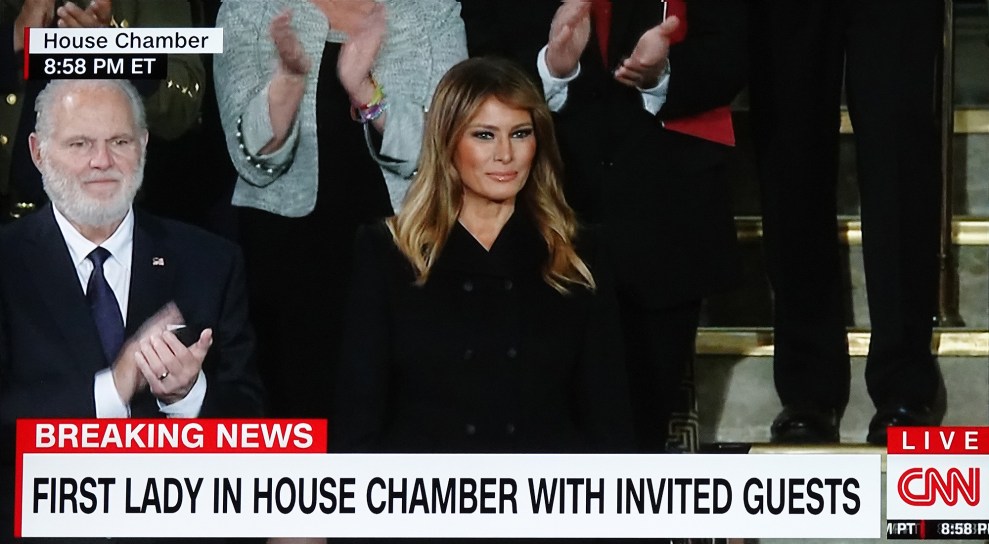 Melania Trump and Rush Limbaugh wait in the House chamber for President Donald Trump to begin his State of the Union address.CNN

My overall response: From a partisan Republican point of view, this was a pretty good speech. Trump stayed on script and was focused like a laser on hitting every hot button he could. The economy is booming. Our enemies are on the run. Our trade policy is great again. We’re keeping our borders secure. We’re protecting religious freedom. Etc. There was absolutely nothing conciliatory toward Democrats. Trump wouldn’t even shake Nancy Pelosi’s hand at the beginning. It was a red-meat reelection speech from start to finish.

It was also more showmanlike than usual, from giving Rush Limbaugh a Medal of Freedom on live TV to reenacting that old faithful tearjerker, a surprise visit of a soldier to his family. As Jake Tapper said, this was a SOTU from a guy who used to be a reality TV star.

Democrats were stonefaced nearly the entire time. Nancy Pelosi shook her head and rolled her eyes and bit her lip. Chants broke out at one point. At the end Pelosi ripped up Trump’s speech.

That’s about it. It was a fairly standard partisan speech, and I’d say Trump delivered it pretty well. There was no mention of impeachment, apparently because Trump decided it was best not to even remind people about it. And why bother? This speech was aimed at Trump’s base, and it hit its target. Transcript here.

I’m not sure I can take yet another one of these from Donald Trump, but duty calls. So let’s get into this.

10:26 pm – We’re listening in as Trump leaves, and the sycophancy of the Republican members of Congress is enough to make you ill.

10:24 pm – And the winner is 78 minutes! Then Nancy Pelosi tears her copy of Trump’s speech in half. What’s up with that?

10:21 pm – Annie Oakley? Was Trump having trouble coming up with women who were part of American history?

10:20 pm – Genuine question here: is it appropriate for a president to use active duty personnel as guests at a partisan event? I truly don’t remember if this was common practice in the past.

10:18 pm – Do we have more heartwarming/heartbreaking guests this year than usual?

9:59 pm – I was wondering if we’d get our annual person “killed by an illegal alien.” Sure enough, we did.

9:44 pm – Trump takes a shot at California, which is going to hell becuase of all the health care we provide for “illegal aliens.” Nancy Pelosi has a classic WTF look on her face. For the record, here’s the economic performance of the ten biggest states since the end of the Great Recession:

9:41 pm – “We will always protect people with pre-existing conditions.” And sure, I suppose so, except for all those plans you actually tried to pass in 2017 that did nothing of the sort. Plus that lawsuit you’re supporting that would immediately take away protections for pre-existing conditions. But it doesn’t matter. As Trump told us years ago, “You just tell them and they believe you.” And they do.

9:38 pm – Oh wait. You might not actually be watching, so I shouldn’t be coy. The answer is “black.” Nearly all of the guests that Trump has invited are people of color.

9:35 pm – The first 20 minutes of this SOTU was one of the most aggressively partisan I’ve heard. According to Trump, the entire country was nearly in a state of collapse under President Obama, and he came along to rescue it just in time. And he did!

9:31 pm – Trump pronounces “Space Force” with a tone of reverence. Say what you will, but forever into the future Trump will be known as the president who created the Space Force.

9:04 pm – ZOMG! Nancy Pelosi offered to shake hands with Trump but he refused.

8:54 pm – Did Dana Bash just say that this is the 100th anniversary of white women getting the vote? WTF?

8:52 pm – We’ve still got a few minutes to go, so let’s play a game. Which of these is the most likely headline following tonight’s speech?