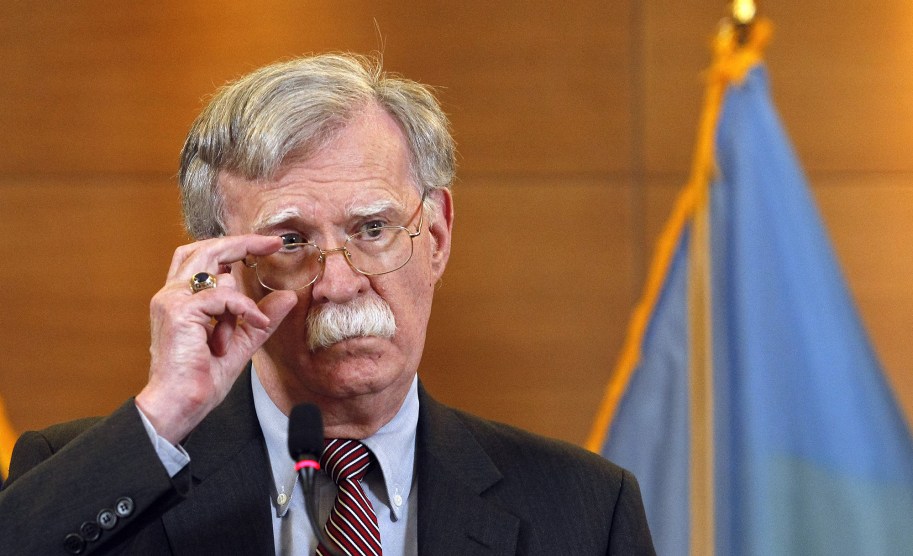 John Bolton is constantly adjusting his glasses. What's up with that?Serg Glovny/ZUMA

I got home a little late last night, so I missed the outcome of the Bolton revelations:

In a closed-door meeting after closing remarks, Senate Majority Leader Mitch McConnell (R-Ky.) told colleagues he doesn’t have the votes to block witnesses, according to people familiar with his remarks who spoke on the condition of anonymity to describe them. Just four GOP senators would have to join with Democrats to produce the majority needed to call witnesses — an outcome McConnell has sought to avoid since it could invite new controversy and draw out the divisive proceedings.

An initial vote to allow witnesses, expected Friday, does not ensure witnesses would actually be called, since the Senate would have to subsequently hold separate votes on summoning each individual witness. And Trump’s ultimate acquittal still remains all but assured, since a two-thirds vote in the GOP-run Senate would be required to remove him.

Friday? What are they going to do today and tomorrow? Pray for divine guidance?

I’m not really surprised by this. After a guy like Bolton—who’s a longtime conservative hero—put his credibility on the line to say that Trump was lying, it was all but impossible not to want to hear from him. Fox News is doing its best to paint Bolton as nothing more than a disgruntled hack, but they’ve been singing his praises for too long to make that stick. And in the Senate, refusing to hear from a fellow Republican of Bolton’s stature is literally an admission that they don’t care whether Trump is guilty or not. They just want to get this over with.

I hardly blame them for that, but it turns out there are still a few Republicans who aren’t quite willing to act so hackishly. Whether that’s because they don’t like Trump or because they just want to do the right thing, is unclear. But it doesn’t matter.

This whole leak remains puzzling, as does Bolton’s initial decision to write about Trump’s Ukraine obsession in his book but not talk publicly about it even though it’s a core part of the impeachment hearings. Did he really want his narrative to come out after the impeachment was over? Why? Did he ever try to get word to House Democrats that he wanted to testify? Why not? Is the current run of events somehow an effort to just sell more books? If it is, I don’t get it. And did Bolton do this as a way to get revenge on Trump for insisting on such a non-warlike foreign policy? Is he the new John McCain?

I doubt that Bolton’s testimony will hold up the trial much. Marc Thiessen tries to make the case today that Trump will claim executive privilege and go to court to stop Bolton from testifying, which will tie up the Senate for months. I wonder if this is true? Sure, Nixon went to court over executive privilege, but that was during the House hearings. In the Senate trial, Chief Justice John Roberts should be able to rule on this, and his opinion will be non-appealable. Or so I think I’ve heard. The whole thing might be quicker than we think.

Of course, the big risk for Republicans is that Bolton’s testimony opens up an entire Pandora’s Box of stuff that has to be followed up—at which point the Senate really might be tied up in knots for months. But that’s the price you pay when your strategy is to relentlessly deny reality, only to have reality finally come crashing down on you. Eventually, even the diehards can’t keep up the act anymore.