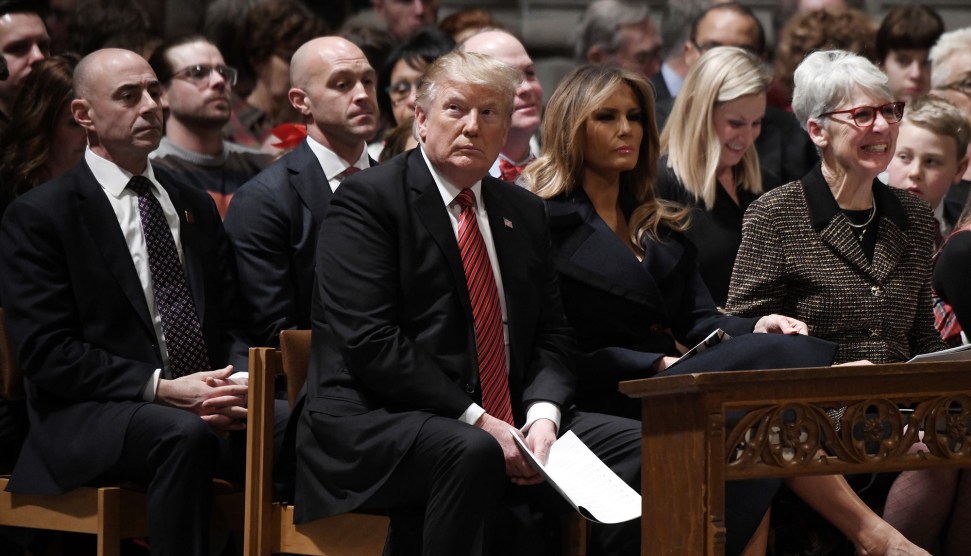 As we all know, white evangelicals are convinced that their religious liberties are under attack from liberals and atheists. But are they really? Political scientists Ryan Burge and Paul Djupe looked at survey data to find out:

[Among] white evangelical Protestants, we found that 60 percent believed that atheists would not allow them First Amendment rights and liberties. More specifically, we asked whether they believed atheists would prevent them from being able to “hold rallies, teach, speak freely, and run for public office.” Similarly, 58 percent believed “Democrats in Congress” would not allow them to exercise these liberties if they were in power.

Is this true? The authors go to a second survey to find out, but it has different questions and different groups of respondents and doesn’t really address the question. Nonetheless they try to tease out an answer, and unsurprisingly the answer is no. Most atheists and Democrats are pretty tolerant of basic religious liberties even if they really, really hate evangelicals. Conversely, evangelicals who hate atheists are pretty intolerant of their religious liberties:

Conservative Christians believe their rights are in peril partly because that’s what they’re hearing, quite explicitly, from conservative media, religious elites, partisan commentators and some politicians, including the president. The survey evidence suggests another reason, too. Their fear comes from an inverted golden rule: Expect from others what you would do unto them. White evangelical Protestants express low levels of tolerance for atheists, which leads them to expect intolerance from atheists in return. That perception surely bolsters their support for Trump. They believe their freedom depends on keeping Trump and his party in power.

I’d add to this that it’s all unfolding against a background in which the biggest real-world fights are over abortion and contraceptives and cake decorators. Conservative Christians believe that their freedom to refuse these services is also a basic religious liberty, and there’s no question that liberals are pretty determined to take those particular liberties away. Given that, it’s a short step to believe that liberals might someday decide to remove their rights to “hold rallies, teach, speak freely, and run for public office.”

In any case, this is something I’ve written about occasionally: it’s impossible to understand evangelicals and their support for Donald Trump without first understanding just how frightened they are of the steady liberal march toward secular hegemony. They consider the aughts and teens to have been a nearly complete disaster, capped by the 2015 Supreme Court ruling forcing states to recognize gay marriage. Many prominent evangelical leaders literally gave up after that, and the ones that didn’t had little hope for the future.

Then, suddenly, Donald Trump showed up and promised them everything they wanted. In short order he became their Joan of Arc, rallying them back to a fight he assured them they could win as long as he was on their side. And rhetorically, at least, he delivered. The fight was back on.

It’s not clear to me that there’s much we can do about this. We can’t do anything about the “inverted golden rule,” and we’re certainly not going to stop fighting for gay rights or reproductive rights. That leaves only a more concerted effort to assure evangelicals that they have nothing to fear regarding things like teaching, speaking, and holding rallies. And even that’s a tough nut when evangelicals can look to other countries and see that, in fact, those rights have occasionally been circumscribed to some degree. This may seem like a pretty small and distant issue, but I assure you that Fox News and talk radio report on every single example no matter how small, and they keep it front and center forever and ever.

Understanding your opponents is usually useful because it provides some guidance about how best to respond. In this case I’m not sure it does, but it’s still good to know on the off chance that it might be helpful. Evangelicals are not generally engaged in faux outrage. They are truly scared silly that liberals will steadily and unrelentingly dismantle their rights if they ever get in power again. Just look what happened the last time.