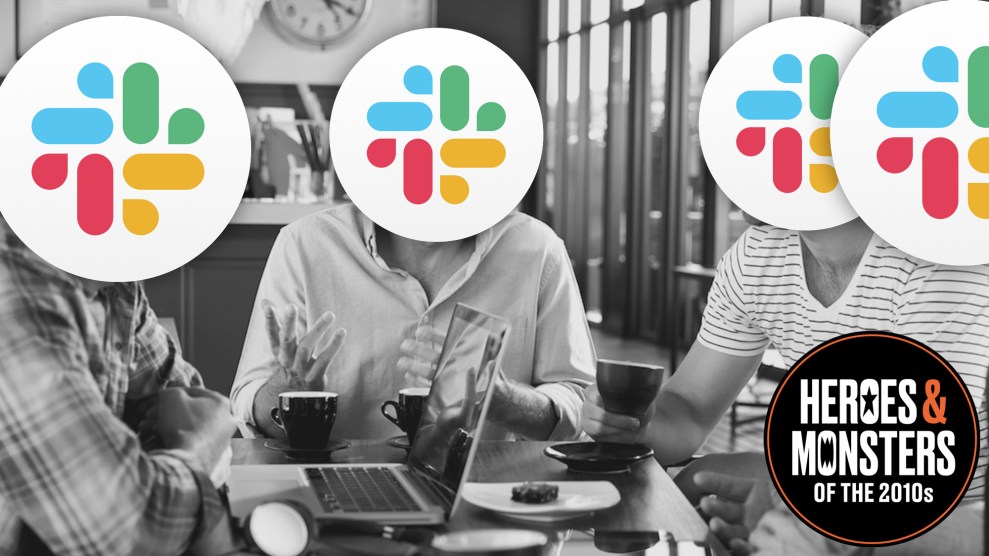 Mother Jones is celebrating the end of the decade with a series of pieces called “Heroes and Monsters of the 2010s.” My favorite is Inae Oh’s serene meditation on the flaws of Slack, a group conversation app widely beloved in Silicon Valley and beyond. But Inae only hates 50 percent of Slack:

Slack is where the very worst in a man comes out to play. Meet a mildly irritating man in person and know that his Slack presence borders on insufferable….Men will invest the merest passing thought with outsized, embarrassing importance, and Slack is the perfect medium for them to gather and preen together. Distract together. Light up unnecessary notifications together. Force better colleagues to stand witness to bad jokes and overwrought opinions together.

But the circle jerk does more than just annoy people. Too often on Slack, it quite literally blinds men to the ideas of others while valuable voices are shut out in the process. It’s become routine to watch men firing off messages, failing to see a woman’s response somewhere in the thicket of madly spinning dicks but of course taking notice later on when a man chimes in with the very same response. The man gets praised for his brilliance, while the woman gets erased, along with the credit due to her. When I die, I want “SCROLL UP” tattooed on my forehead.

For every bad dude flooding the zone with his performances, his ego, his contrarianism, know that there’s always a woman behind the scenes doing the damn work and getting shit done, wishing the whole platform would just collapse from the weight of self-important men.

The only defense I can offer for Slack is that at least it’s an excellent mirror of the real world. The inability of men to notice when women say something is a longstanding feature of meetings in meatspace too, and apparently Slack has done nothing to improve that. On the bright side, however, it looks like Slack has done nothing to make it worse, either, which Twitter has shown is quite possible.

I don’t use Slack since I’m off in my own little corner of the universe, but I can well imagine what it’s like. In fact, anyone who has ever participated in Usenet or IRC or anything similar can imagine what it’s like. And as much as I sympathize with Inae, I have to say that I probably hate 100 percent of Slack. The problem is basic economics: if you make something cheaper, you get more of it. Over the centuries, long-distance communication has evolved from papal bulls carried on horseback to the penny post to the telegraph to the telephone to the super-cheap telephone to email to text to Slack.¹ All of these innovations made communication cheaper and easier and therefore produced more and more communication.

But is that good? Isn’t there some limit to how much communication we need before it becomes a bigger time sink than it’s worth? I figure that somewhere around the time of essentially free telephone calls and the explosion of email was probably where we went off the cliff edge. Now we communicate so madly that it’s a wonder we ever get anything done at all. If someone conducted a study showing that email and Slack and texting were responsible for the productivity slowdown of the aughts and teens, I’d probably believe it sight unseen. That’s trillions of dollars, people. Trillions!

¹Which is not so new as many people think. Remember Lotus Notes? It was pretty popular in its day and did many of the same things Slack does.