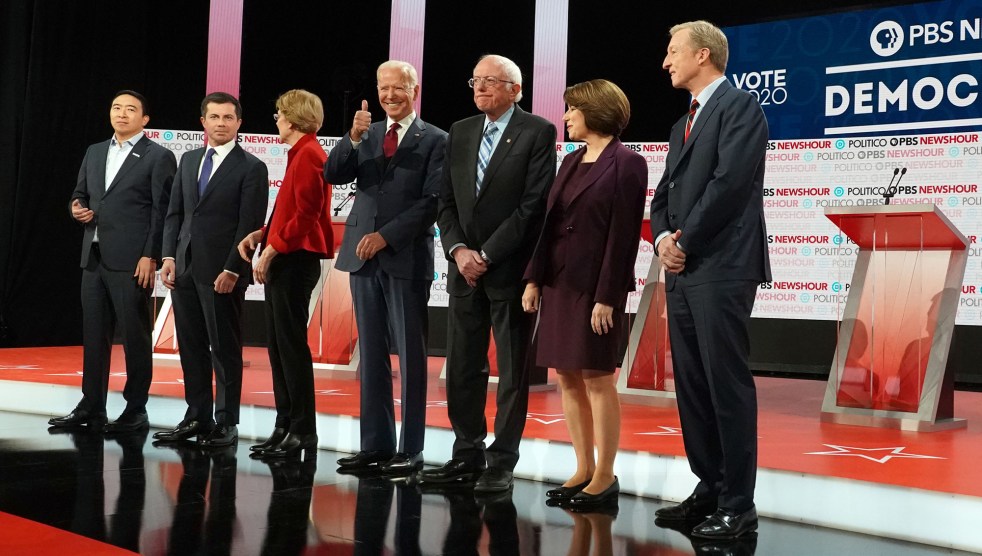 It made a big difference having only seven candidates on the debate stage tonight. Almost everyone got time to weigh in on almost every subject, and there was less downtime while the debate suddenly seemed to stop dead so we could hear from the folks who had no business being there. That said, here are my first impressions of how everyone did:

Amy Klobuchar seemed like the big winner, relatively speaking. She got plenty of speaking time, she was clearer than usual in her answers, and she did the best job by far of selling a moderate vision without directly attacking Warren or Sanders.

Pete Buttigieg was the big loser. I thought he sounded more politician-y and rehearsed tonight than usual, and his newfound combativeness didn’t play well. During his squabble over fundraising with Warren and his squabble with Klobuchar over experience, I thought he came out on the losing end both times.

Joe Biden had a good night. For one thing, the tone of this debate was louder and more aggressive than past debates, and by contrast Biden sounded like a cool drink of water whenever he spoke. That’s a good look for him. He also did well when he got a little more animated, as he did when talking about immigration and Afghanistan.

Bernie Sanders was . . . Bernie Sanders. Even after you account for the fact that I’ve never been a big fan of his, he just sounded like he had absolutely nothing new to say. In debate after debate, all we hear is that he’s somehow going to lead a revolution and then all our progressive dreams will come true. Meh.

Elizabeth Warren had some good answers and some bad ones. I’m undecided about whether it was smart to simply say “They’re wrong!” when she was asked about economists who said her two-percent wealth tax would be bad for the economy. On the one hand, yay! She’s probably right. On the other hand, don’t you have to at least pretend to take the experts seriously? This is a Democratic debate, after all, not a Republican one.

On the positive side, “billionaires in wine caves” is likely to be the meme of the night.

Andrew Yang showed some nice flashes of humor, and I admire the guts of anyone who’s willing to say “thorium nuclear reactor” on a public stage. But he’s still never going to be president of the United States.

Tom Steyer didn’t matter before the debate, and he still doesn’t matter.