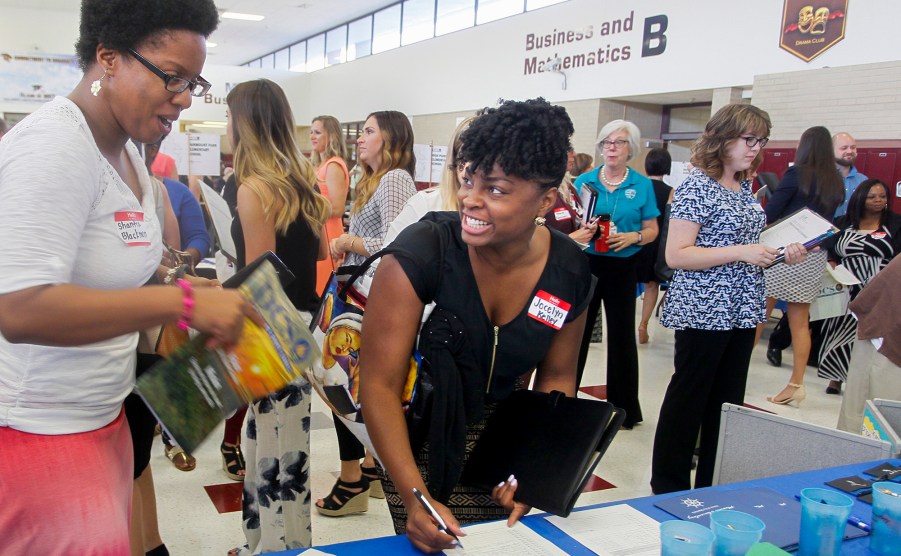 Will they get as many callbacks as the white folks behind them?Dirk Shadd/Tampa Bay Times via ZUMA

A popular way of testing for racist attitudes in employment is to send multiple applications to a single job posting. The applications are generally identical except for one thing: the names of the applicants. One has a sterotypically white name (Madison Nash) and the other has a stereotypically black name (LaShonda Greene). Then you check to see how many of the white names get callbacks for interviews compared to the black names. Generally speaking, the white names get called back at a rate 2-4 percentage points higher than the black names.

Today, Brad DeLong calls my attention to a clever new study that tries to tease out exactly what causes this difference.

The types specification finds that only about 17% of jobs discriminate against blacks….However, the degree of discrimination among such jobs is estimated to be very severe — the odds of receiving a call back are roughly [] 53 times higher for white applications than blacks.

In other words, the vast majority of hiring managers aren’t using a racial filter. Only a small group, about one-sixth of the total, discriminates against blacks, but that sixth is massively racist: they all but flatly refuse to even interview someone who seems like they might be black.

Brad says he’s surprised by this, but I’m not. My mental model of racism in recent decades is that, in fact, most people aren’t especially racist—or at least they genuinely try not to be. However, there’s a segment of the population—yes, these are Hillary Clinton’s “deplorables”—who are still openly and defiantly racist in all things. All by themselves, their racism is so overwhelming that it’s enough to make a noticeable difference in the overall rate.

Now, one thing to note here is that this method of sussing out racism sets a very low bar. To pass, all you need to do is be willing to interview someone with a stereotypically black name. You don’t have to hire them, just set up an interview. In other words, this experiment doesn’t really suggest that 83 percent of hiring managers aren’t racist in any way, just that they aren’t huge, raging assholes.

That said, I’m prone to believe that this result is a general one. The evidence I’ve seen suggests that most Americans are, at most, very mildly racist these days. However, there’s still a sixth of the country that basically wishes Jim Crow could make a comeback. This in turn means that perhaps one-sixth of the jobs in America are all but completely denied to blacks.

There’s value in knowing this, because it provides some idea of what needs to be addressed most urgently: identifying the stone racists, not providing endless diversity lessons for everyone else. This study is well worth a follow-up to see if its results hold up.