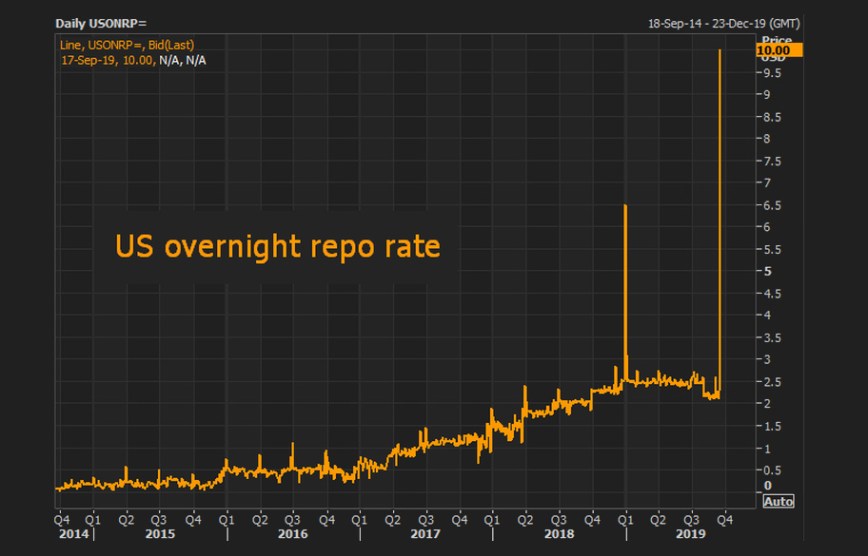 Every afternoon banks settle their accounts with each other and then figure out how much cash they need for routine operations the next day. The banks that need cash borrow it in the repo market from other banks at rates that are usually just a little above the Fed’s policy rate. The whole thing is very dull and predictable.

Over the past couple of years, as the Fed has been raising interest rates, repo rates have gone up too. Right now they’re hovering a little over 2 percent. But something odd happened this week:

The surge in repo rates began Monday afternoon, well after the vast majority of trading in the market for overnight loans typically takes place, investors, traders and analysts said. The origin of the demand for cash was unclear, as traders seeking cash could have been acting on their own behalf or as intermediaries for other parties, one trader said.

Unexpected bids seeking cash entered the market at a time traders said was uncomfortably close to the 3 p.m. deadline for settling trades.

Scott Skyrm, a repo trader at Curvature Securities LLC, said he had seen cash trade in the repo rate as high as 9.25% Tuesday. “It’s just crazy that rates could go so high so easily,” he said.

The Fed stepped in with boatloads of cash to steady the repo market, so no harm has been done. But what caused this in the first place? The Fed offered up a heaping serving of bafflegab:

The pressures relate to shortages of funds banks face resulting from an increase in federal borrowing and the central bank’s decision to shrink the size of its securities holdings in recent years….Reserves over the last five years have been declining….Then on Monday, corporate tax payments were due to the Treasury, and Treasury debt auctions settled, leading to large transfers of cash from the banking system. Meanwhile, postcrisis financial regulations have made short-term money markets less nimble.

In other words: nothing to see here, just the odd confluence of a bunch of technical factors all at the same time. It’ll blow over pretty quickly.

Which might be true. It’s certainly above my pay grade to analyze this. Still, the whole “technical factors” explanation has a whiff of post hoc bullshit to it, especially considering that this emergency started very suddenly right near the close of business on Monday. It seems like somebody needed a whole lot more cash than they had anticipated, and for some reason other banks were reluctant to lend it. Maybe that’s because the other banks really were short of cash. But it might also be because they knew who the counterparty was and they were afraid that even a 12-hour loan ran the risk of not getting paid back. It’s the kind of thing that happens during a banking crisis—which, as it happens, is the last time the Fed had to intervene in the repo market.

I don’t mean to go all grassy knoll on this. I suppose it’s more than likely that this really was just a weird coincidence that will be cleared up shortly. But it’s worth keeping an eye on. For now it’s just a mini-mystery.