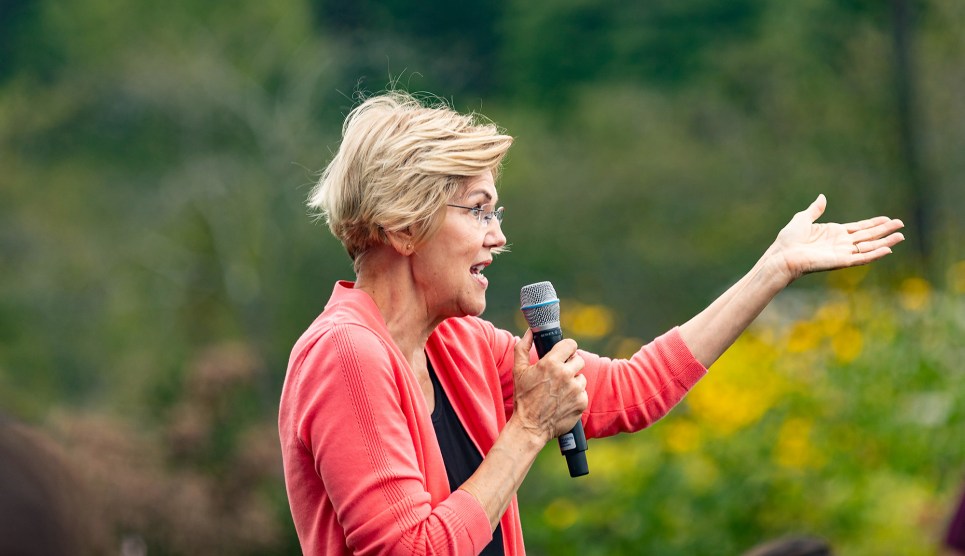 The real subtext of his question wasn’t about Trump rollbacks, it was one of the right’s favorite talking points: the argument that climate change requires a major personal sacrifice of individual autonomy to government control.

“Oh come on, give me a break,” Warren said with exasperation. “This is exactly what the fossil fuel industry wants us to be talking about. That’s what they want us to talk about: This is your problem.”

There was an inexplicable amount of talk about cheeseburgers throughout an evening that was otherwise filled with substantive climate questions. Throughout the conversations with the candidates, CNN anchors kept returning to questions concerning false fears that a president could take away plastic straws, red meat, and even Amazon Prime. A president can’t and won’t be doing that in 2021. All of those fears about great personal sacrifice come straight from a Fox News obsession with deliberately misreading the non-binding Green New Deal resolution early on.

This kind of stuff is irritating, but at the same time it really does pose a dilemma for the left. Maybe we don’t want to take away anyone’s cheeseburgers, but we really are the ones who want to regulate light bulbs. And plastic bags. And straws. And SUVs. And urban sprawl.

You can make good arguments for these regulations and others, but there’s no question that it also gives ammunition to the right. The question is whether regulations like this do enough good to be worth the loss in public support they provoke by being annoying. I don’t have a good answer to that, but the obvious corollary to Warren’s point that “70 percent of the carbon that we’re throwing into the air comes from three industries” is that we should focus our attention on those industries and stop annoying people with light bulb laws and attempts to build high-rises in the suburbs.

This is a genuinely hard problem, and I don’t have a settled opinion about it. On the one hand, the flip side of annoying people is that it gets their attention—and that’s good. Maybe they’ll kvetch, but they’ll also get the message that it’s time to get serious about climate change. On the other hand, no one thinks that personal commitments to lifestyle changes will ever have a serious impact on global warming. Only large-scale government action can do that. So maybe we should stop annoying people for something that produces little benefit.