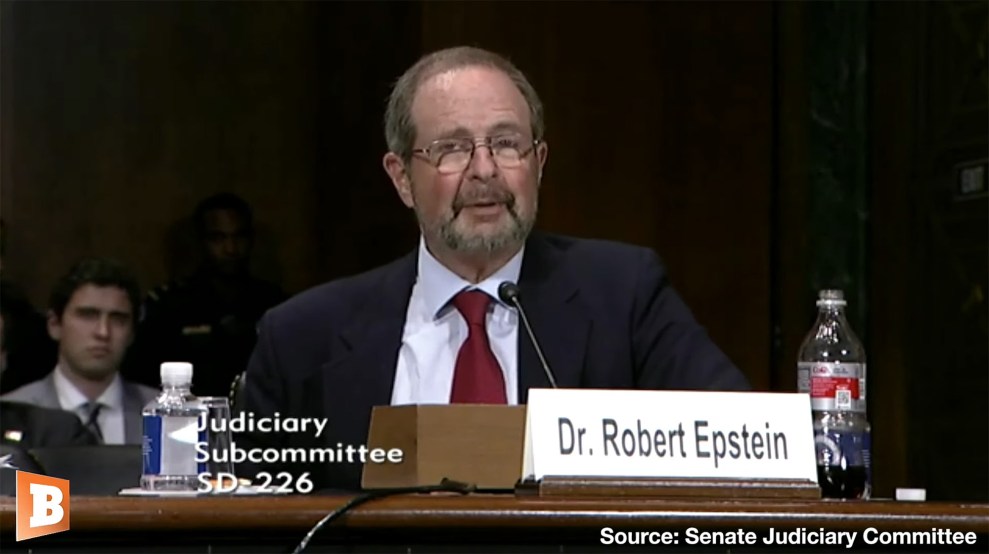 I actively try not to spend any time reacting to Donald Trump’s idiot tweets these days, but it’s a little slow this morning and this tweet has people genuinely puzzled:

Wow, Report Just Out! Google manipulated from 2.6 million to 16 million votes for Hillary Clinton in 2016 Election! This was put out by a Clinton supporter, not a Trump Supporter! Google should be sued. My victory was even bigger than thought! @JudicialWatch

This is old stuff that Trump is just catching up to, for some reason. The nickel version is that several years ago celebrity psychologist Robert Epstein got into a tiff with Google in which he turned out to be embarrassingly in the wrong. Ever since then Epstein has been gunning for Google, and prior to the 2016 election he claimed that they were deliberately manipulating search results in a way that favored Hillary Clinton.¹

So that’s the proximate source. But where do Trump’s numbers come from? That’s a little harder to figure out. Last month, in a conspiracy-laden conversation² with Sen. Ted Cruz, Epstein testified before the Senate Judiciary Committee that Google was responsible for shifting something between 2.6 and 10.4 million votes to Clinton in 2016 and that in 2020 all of big tech together could—and probably would—shift as many as 15 million votes without anyone ever knowing. I assume that Trump misheard this and thought he said 16 million.

Fine. But where does Epstein get those numbers? This is a bit murky, but a couple of years ago he published a paper showing that search results can bias decisionmaking. The limits of the paper are so breathtaking that I’m not sure how you can draw any real-world conclusions from it, but basically he came to the unsurprising conclusion that if you (a) give people a choice of two politicians they’ve never heard of and (b) provide search results that are unanimously positive toward one and negative toward the other, then (c) they’ll tend to support the person who got the positive results. No kidding.

This year he presented another paper, but I can’t find it and there’s a limit to how deeply I’m willing to dive down this particular rabbit hole. However, here’s the LA Times report:

In his latest study, which he and a co-author plan to present in April at the 99th annual meeting of the Western Psychological Assn., in Pasadena, Epstein tracked 47,300 searches by dozens of undecided voters in the districts of newly elected Democratic Reps. Katie Porter, Harley Rouda and Mike Levin.

Mainstream outlets, including the Los Angeles Times and the New York Times, dominated the Google search results. By contrast, searches conducted on Yahoo and Bing more often showcased links from deeply conservative outfits such as Breitbart.

Using a model he has developed to gauge the subliminal effect of what he sees as tilted search results, Epstein projected 35,455 voters who were on the fence were persuaded to vote for a Democrat entirely because of the sources Google fed them.

You read that right: Epstein thinks Google’s algorithms are biased because they give too much weight to mainstream news outlets and too little to folks like Breitbart. Then he fed this alleged bias into a model of his own devising, which claims it was responsible for 35,455 Democratic votes in three congressional districts in 2018. Presumably this is then projected yet again to produce the 2.6 million number for Hillary Clinton in 2016.

This is a house of cards and appears to have virtually nothing behind it aside from the initial grudge against Google that Epstein brought into it. However, because Epstein is a liberal Democrat, conservatives are in love with him. They can’t get enough of the Hillary supporter who nonetheless claims that Trump was cheated out of votes by the evil geniuses at Google.

Maybe someone else will dive into this a little more deeply, but that’s about as much as I’m willing to do. In any case, I’m not sure how much more we’re going to see from Epstein. He’s busy on a whole bunch of books right now and probably won’t have much time for this.

²Perhaps you think I’m exaggerating? Fine. At great expense I have hired a team of expert transcribers to take down Epstein’s exact words. Here he is after Ted Cruz asks him to explain how a get-out-the-vote message could be transformed from a PSA to a manipulation of the vote:

On Election Day in 2016, if Mark Zuckerberg, for example, had chosen to send out a Go Vote reminder, say, just to Democrats—and no one would have known if he had done this—that would have given that day an additional at least 450,000 votes to Democrats.

….I don’t think that Mr. Zuckerberg sent out that reminder in 2016. I think he was overconfident; I think Google was overconfident, all these companies were…. But the point is in 2018 I’m sure they were more aggressive. We have lots of data to support that. And in 2020? You can bet that all of these companies are going to go all out, and the methods that they’re using are invisible, they’re subliminal, they’re more powerful than most any effects I’ve ever seen in the behavioral sciences.