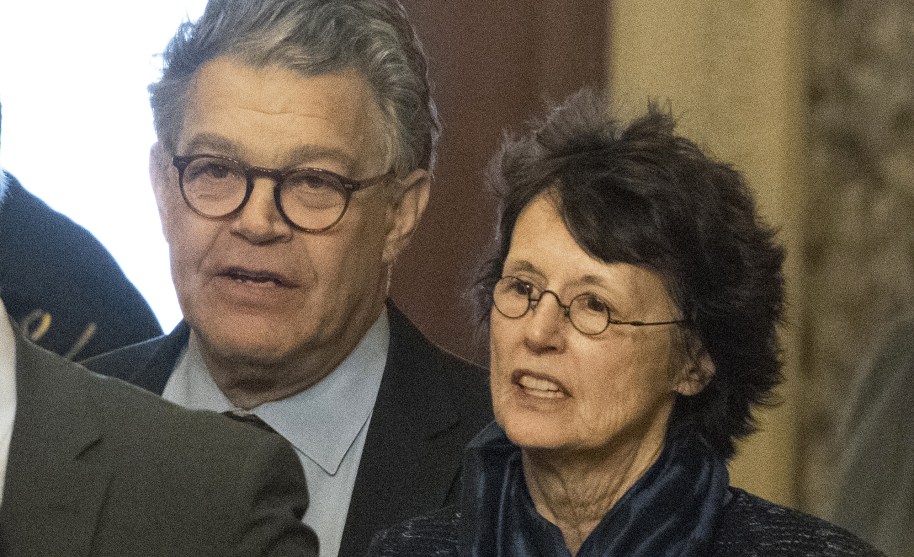 Al and Franni in the capitol building on the day Franken resigned.Ron Sachs/CNP via ZUMA

I am loath to write a defense of Al Franken because—well, because I’m a coward. I know that doing this will produce nothing except a tsunami of criticism from people who think I’m just another apologist for rape culture who refuses to believe women who say they’ve been harassed. But hell. What’s the worst that can happen? Nothing much. And if I’m afraid to do this, I can only imagine what it’s like for someone who might actually have something to lose. So let’s do it.

Two things before I start. First, I can’t prove anything. No one can. All I can do is lay out a fact pattern and suggest where it leads. Second, I am not arguing that Franken was punished too harshly for conduct that’s not a big deal. I’m arguing for actual innocence. That is, I’m suggesting that he just didn’t do the stuff he’s accused of.

OK. There were eight women who accused Franken of inappropriate contact. Let’s go through them.

As near as I can tell, three of the women most likely misrepresented what happened. Leeann Tweeden, Franken’s initial accuser, certainly lied profusely, as Jane Mayer documented yesterday, so I don’t need to say much more about her. She made her accusation on a right-wing radio talk show, so her motivation for this is hardly a secret.

Stephanie Kemplin says Franken cupped her breast when she posed for a photo with him during a 2003 USO tour. However, the photo shows Franken behind a table and Kemplin in front of it. It’s hardly plausible that Franken could have reached her breast from that position even if Kemplin adjusted her stance before the picture was taken.

Tina Dupuy says that at an inauguration party in 2009 Franken “put his hand on my waist, grabbing a handful of flesh.” The picture she produced is bizarrely cropped and low-res, even for 2009, and I’ve tried to enhance it a bit below:

It’s impossible to say for sure, but it looks as if Franken’s arm is in front of Dupuy, not behind her. It’s hard to tell, though, because the artifacts in the image are far more conspicuous right in that area. It looks to me like someone crudely photoshopped that part of the image with a blur brush, though it’s impossible to say for sure. In any case, the picture as it stands doesn’t support Dupuy’s case. I’d very much like to see the original.

Apart from these three, there are four women who insisted on remaining anonymous. There are, obviously, sometimes good reasons for anonymity, but it’s also true that it provides a shield for accusers who don’t want to be questioned too closely about their charges.

Of these four, #2 implausibly suggests that Franken tried to follow her into the bathroom in full view of everyone at a fundraiser. #3 says Franken tried to kiss her in full view of hundreds of people. #4 makes a claim that seems unlikely on its face—it’s a small room with several other people right there—and produces no corroboration. That leaves only #1, about whom we can’t say much. I’d sure like to see the photo, though.

Finally, there’s Lindsay Menz. She says that Franken grabbed her butt while she was posing for a picture with him at the Minnesota State Fair in 2010. The picture is a head-and-shoulders shot, so it provides no evidence one way or the other. Franken allegedly did this even though Menz’s husband was right nearby. This is hardly impossible, but it doesn’t seem very likely.

Of these eight, then, six are pretty implausible on their face. The other two incidents might have happened, or they might simply have been normal accidents. Or it might be that Franken actually had his arm around their waist but just low enough to startle them into thinking he was grabbing their butt.

But this isn’t all. Consider all of the following:

As strong as I think this fact pattern is, it has a gigantic hole: if Franken is innocent, why did eight separate women come forward to accuse him? Was this some kind of coordinated attack? I admit that hardly seems likely.

In the end, I think Franken is most likely innocent, but I have no good explanation for what produced a sudden deluge of harassment allegations against him. If it was a ratfuck, it was surely one of the most genius ratfucks of all time.

Either way, though, I think Franken was treated badly. Given his previous reputation and the weakness of the allegations, he certainly deserved some kind of investigation and a chance to defend himself. Instead he was jettisoned “for the good of the party.” I find that pretty despicable.