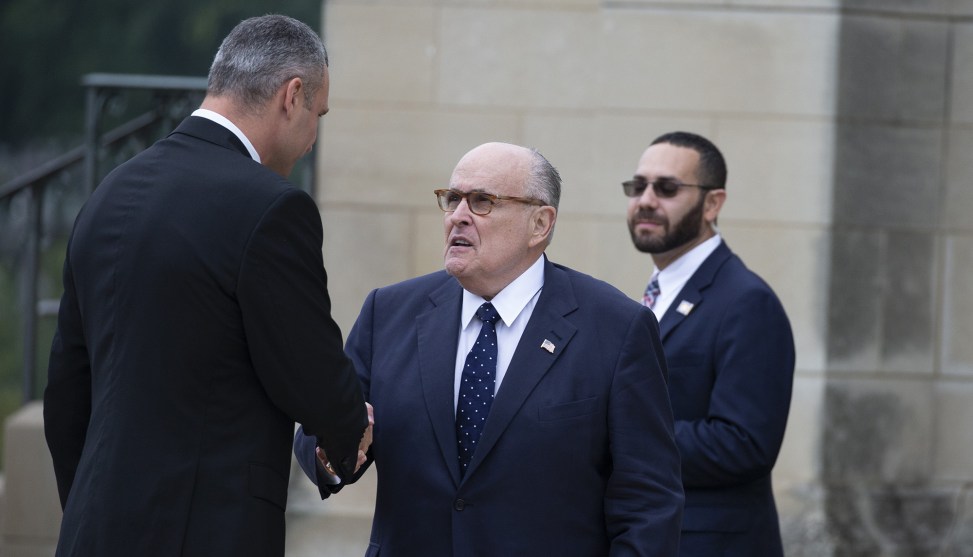 Rudy Giuliani and his pal, the mayor of Kiev.Alex Edelman/CNP via ZUMA

Check this out. Joe Biden’s son used to sit on the board of a Ukrainian company that was under investigation by the corrupt chief prosecutor of Ukraine. The United States, along with all of Europe, wanted the corrupt prosecutor gone, and eventually Ukraine complied. Biden, as a representative of the US, was involved in this effort. This all happened years ago, but now the current Ukrainian prosecutor is reopening the case. Why? Take a guess:

The Trump team’s efforts to draw attention to the Bidens’ work in Ukraine, which is already yielding coverage in conservative media, has been led partly by Rudolph W. Giuliani, who served as a lawyer for Mr. Trump in the investigation by the special counsel….Mr. Giuliani has discussed the Burisma investigation, and its intersection with the Bidens, with the ousted Ukrainian prosecutor general and the current prosecutor. He met with the current prosecutor multiple times in New York this year. The current prosecutor general later told associates that, during one of the meetings, Mr. Giuliani called Mr. Trump excitedly to brief him on his findings, according to people familiar with the conversations.

….Mr. Trump, in turn, recently suggested he would like Attorney General William P. Barr to look into the material gathered by the Ukrainian prosecutors — echoing repeated calls from Mr. Giuliani for the Justice Department to investigate the Bidens’ Ukrainian work and other connections between Ukraine and the United States.

….The decision to reopen the investigation into Burisma was made in March by the current Ukrainian prosecutor general, who had cleared Hunter Biden’s employer more than two years ago. The announcement came in the midst of Ukraine’s contentious presidential election, and was seen in some quarters as an effort by the prosecutor general, Yuriy Lutsenko, to curry favor from the Trump administration for his boss and ally, the incumbent president, Petro O. Poroshenko.

These guys are a piece of work, aren’t they?  The short version of this story is that Trump and his allies are pressuring Ukraine to open an investigation tenuously linked to Joe Biden’s son because Biden is a political opponent. It’s like living in a banana republic.

And of course the New York Times takes the bait with a story that begins with nine paragraphs about the possibility of Joe Biden having a conflict of interest, and only getting to Team Trump’s involvement in the tenth paragraph. Nice work, guys.