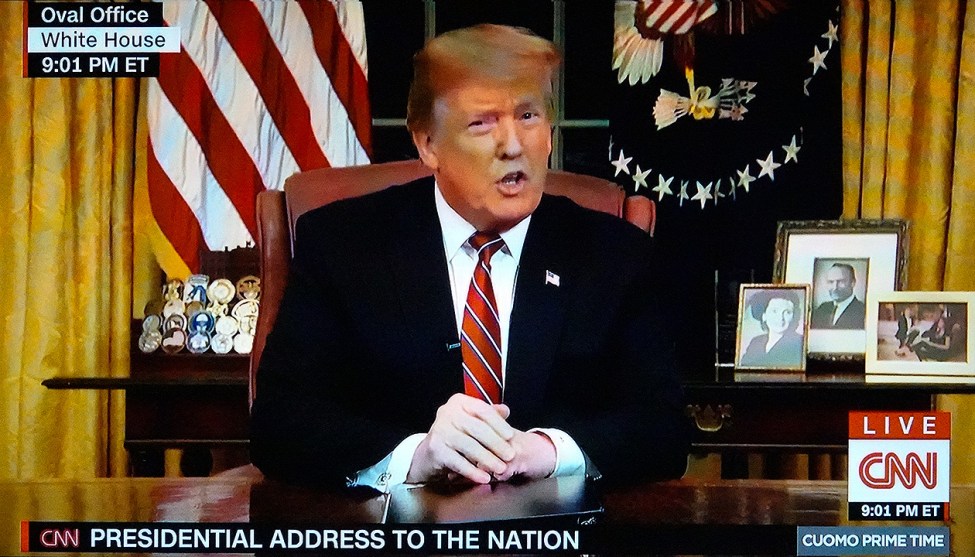 I guess I’ll liveblog the speech tonight. It’s only supposed to be eight minutes long, after all. So let’s give it a go. As usual, read from the bottom up.

My reaction: both sides were pretty ineffective. Trump’s speech was disjointed, and it was poorly delivered. He seemed nervous the whole time, and lied just enough to keep the fact checkers in business but not enough to make any interesting new points. That’s a dumb compromise from whoever wrote the speech. Also, eight minutes is just not enough time to give a decent address. It forces too much shortening of points that need a little more explanation for viewers who haven’t followed this debate in detail. Even I had to concentrate hard to pick up all of Trump’s points.

The response from Schumer and Pelosi was mostly boilerplate. Nothing badly wrong with it, but nothing very persuasive either. I would guess that almost no minds were changed tonight.

The CNN folks are now getting really animated. The more they think about it, the less they like Trump’s speech. Who doesn’t have a good heart? What’s the deal with the claims about a steel bollard fence, which is what we have right now? It’s just untrue that Dems are responsible for the shutdown. Jim Acosta says the speech should have come with a surgeon general’s warning that it was hazardous to the truth. Democrats never asked for a steel fence. Etc.

A full transcript of Trump’s speech, along with some fact checking, is here.

And now for the Democratic response. Chuck Schumer is much taller than Nancy Pelosi, and he’s staring at the camera sort of creepily as Pelosi speaks and he has nothing to do. Pelosi says Trump is manufacturing a crisis. We can solve all our border problems without a wall.

Schumer says the shutdown is Trump’s fault. “We don’t govern by temper tantrums.” Pelosi is pursing her lips. I guess it’s tough to stand silently while the other person is talking. Schumer now suggests we reopen the government and then keep on talking about the border. Trump is just “stoking fear.” We can protect our borders without an “ineffective, expensive wall.” Mr. President, “End. this. shutdown. now.” And that’s that.

Fact check from John King: The wall won’t do much about drugs, which come in from legal points of entry. NAFTA will not pay for the wall. People who are in the country illegally commit fewer crimes than natives.

Fact check from Daniel Dale: There’s not much child trafficking across the border. Not true that Democrats wanted a steel wall.

9:11 – “When I took the oath of office, I swore to protect our country, and that is what I will always do, so help me God.” And that’s a wrap. No declaration of a national emergency.

9:09 – Unsurprisngly, very heavy on crimes by people in the country illegally and how it affects the families of the victims. “I will never forget the pain in their eyes, the tremble in their voices, and the sadness gripping their souls.”

9:07 – Democrats are responsible for the shutdown because they don’t care about national security.

9:06 – The wall will be paid for “indirectly” by the new NAFTA agreement. Dumb, dumb, dumb.

9:05 – “At the request of Democrats” the wall will be a steel barrier instead of a concrete wall. That’s just idiotically untrue.

9:03 – Wow. A ton of numbers about crimes by undocumented immigrants. I have no idea if they’re correct. [Later: the post-speech Washington Post fact check didn’t flag anything, so I guess the numbers are accurate.]

9:02 – Blacks and Hispanics are the hardest hit by undocumented workers taking away their jobs. Vast quantities of illegal drugs flow in across the border.

9:00 – According the CNN, we are moments away. But they don’t seem to be in any special hurry to switch to the Oval Office.