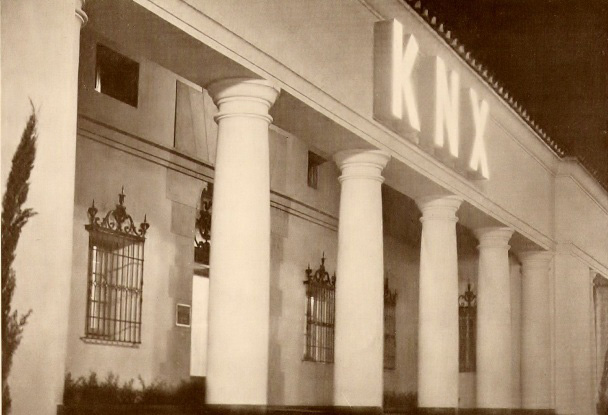 The facade of the Old Spaghetti Factory building back in better days when it was the KNX building.

This is a story of Los Angeles. Don’t worry, though, it’s a short one and you’ll find it either amusing or rage-inducing depending on your point of view.

Back in 2008 an apartment building was approved for construction at the corner of Sunset and Gordon. After a few years of lawsuits, the project was sold to another developer, who was once again given permission to begin construction as long as they kept the facade of the Old Spaghetti Factory restaurant (est. 1969) intact. Yes, this is what counts as historic preservation in LA. Sure, it was an entirely undistinguished building, but it was erected in 1924. Historic! (You can read more about it here.)

In the event, the developer concluded that the crumbling old building couldn’t be saved, so they tore it down and built a replica. Then they built the apartment building. Then people moved in. But then a judge ordered everyone to move out. The LA Times describes what happened:

Four years ago, a judge dealt a huge blow to the owners of a 299-unit apartment tower on Sunset Boulevard, striking down the project’s permits and, ultimately, forcing the building’s residents to move out…..The Coalition to Preserve L.A., a group funded by the Hollywood-based AIDS Healthcare Foundation, criticized the city’s environmental review of the tower, saying traffic counts on local streets are off by about two-thirds. The city’s review overestimated the number of residents who will rely on public transportation, said Mitchell M. Tsai, the coalition’s lawyer.

Wait. The developer was sued by the AIDS Healthcare Foundation? What does this have to do with AIDS? Well, the head of the foundation was and is Michael Weinstein, and back in 2015 he had gotten pissed off about an entirely different venture called the Hollywood Palladium development:

Weinstein had been a vocal opponent of the project and a regular attendee at community meetings, where he urged the developer to reduce its height. The proposed buildings would block the view from the international headquarters of Weinstein’s AIDS nonprofit, on the 21st floor of the Sunset Media Center on Sunset Boulevard.

Shortly after that, Weinstein decided that every tall building in Los Angeles was evil, and even bankrolled a city initiative that would have put a two-year moratorium on all development. That failed, but Weinstein’s lawsuits against tall buildings continued. The purported reason has shifted a bit over time, but has something to do with AIDS patients frequently being poor and the new buildings having insufficient low-income housing. The board of the foundation apparently puts up with this because Weinstein is a dynamo who raises enormous amounts of money for AIDS and HIV-related causes. If he wants to spend a few million a year on a hobbyhorse, why not? It’s better than spending money on a private jet or something.

Anyway, the Sunset and Gordon project was re-approved last week, but of course that doesn’t mean anybody gets to move in. It just marks the beginning of a whole new round of lawsuits, presumably based on the allegedly faulty traffic analysis. By a weird coincidence, it turns out that every new building project in LA has done a poor job of traffic analysis and therefore gets sued.

I read a lot of complaints about how long it took to build the new World Trade Center in New York City after 9/11. But that was a huge skyscraper, and even at that it only took 13 years. In Los Angeles, a bog ordinary 299-unit apartment building still hasn’t opened its doors after ten years. It just goes to show the danger of blocking the view of the wrong person.