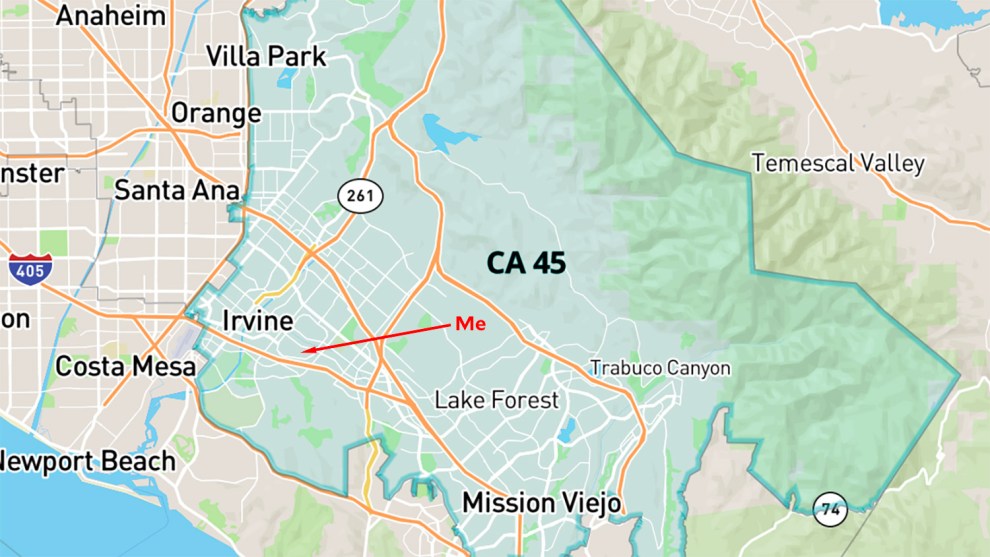 I live in California’s 45th congressional district. So what’s going on here?

Before 2016, the closest Katie Kalvoda got to political activism was paying $18 for a Barack Obama T-shirt….But when President Trump was elected, the stakes started to feel different. A mother from her daughter’s school e-mailed a couple of dozen women, including Kalvoda, proposing they get together to vent, drink wine and write letters to Congress. That email planted the seeds of a movement. After dropping off their kids at school, about 12 moms met up at a San Juan Capistrano Mexican restaurant — a favorite of Richard Nixon’s — where they talked about turning their anger and frustration into action. Most had never been politically active before, but with Trump, that had changed.

It’s a story as old as time: suburban housewives look up one day and discover politics. The result is Moms for Goldwater or the Patriots’ Tea Party or Women Against Trump. Either way, you know things are getting serious when the suburbanites get involved:

Two years later, the political action committee — Women for American Values and Ethics — has grown to more than 700 members….“We harnessed the energy of women with these incredibly successful careers who are now stay-at-home moms, tapping into their time, experience and professionalism,” said Joanna Weiss, 46, who sent the initial email that led to formation of WAVE.

….One WAVE member, Cathy Han, 48, a retired ob-gyn with three children, went door to door canvassing for the first time in her life this month. She said she is seeing similar political energy in Facebook groups for physicians who are working mothers. Han said she was particularly motivated by the Brett Kavanaugh hearings because she has treated many sexual assault victims. “Working mothers are good at multitasking. Before they were in the PTA, now they’re in politics,” she said. “Mothers are fired up.”

….Kalvoda said for her, it was about wanting to return decency and humanity to the way the country is run. She also cares deeply about the environment, and is concerned about Trump administration policies rolling back regulations and protections. She used her professional skills from years of investor meetings and put together a “pitch book” about WAVE for prospective members, and cold-called politicians to ask them to headline her fundraisers the way she once cold-called owners of buildings she wanted to buy.

“Our husbands are really afraid of us. They have definitely seen a side of us they haven’t seen before,” Kalvoda said. “Some of them are reconciling that, going ‘Whoa, who are you?’”

Here in the 45th, Republican incumbent Mimi Walters is trying to pretend she’s never heard of Donald Trump. It’s the right strategy, I suppose, but Democrats have no intention of letting her get away with it. Ads like this one have been running so often that I’m afraid my TV might break:

But that’s only fair. Walters may be pretending not to be a Trumpie, but as the saying goes, when you lie down with dogs, you wake up with fleas.