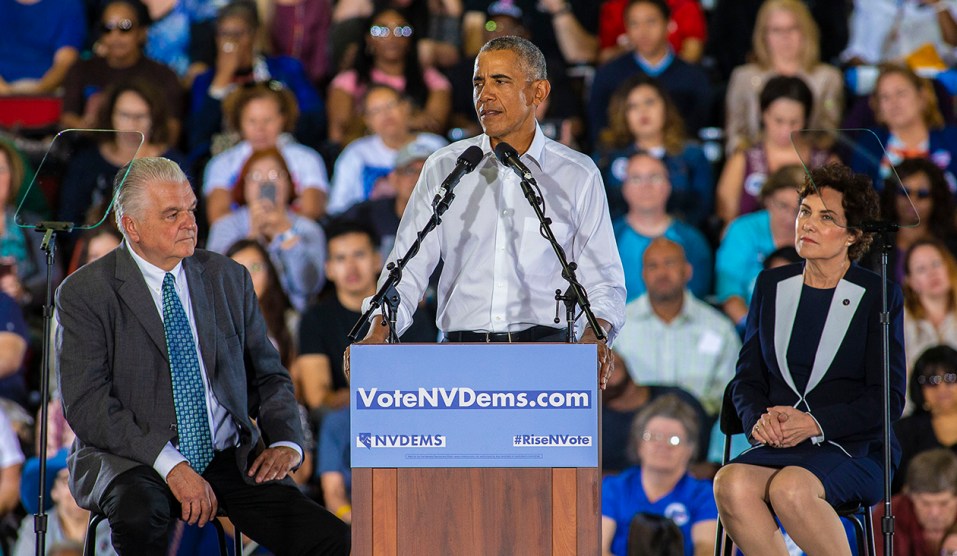 Doesn't everyone look excited? Can you see the cheering? The sign waving? Do you believe that these people are going to leave this rally all charged up to tell their friends who to vote for?Larry Burton via ZUMA

I’m assuming there are some compassionate Republicans out there who think there’s nothing American about ripping immigrant children from their mothers.

It is not a Democratic or Republican idea that we are not supposed to pressure the attorney general or the FBI to us the criminal justice system to try to punish political opponents. That’s not how America works.

Yawn. Does this kind of stump speech work? I suppose it’s good for Democrats who are already planning to vote for Democrats anyway. It makes them feel better about their party, after all. But does it do anything else? Does it motivate the base? Does it pull in moderate conservatives? Does it get news coverage? Does it appeal to young voters? Or Hispanics? Does it make the lines of battle clear?

Not really. I understand that Obama is an ex-president and feels the need for a certain decorum, but times have changed. Decorum isn’t a big part of national politics these days. How about this instead? When you read it, try to imagine it in Obama’s voice:

The entire Republican Party is dedicated to lying all the time. Climate change is a hoax. Sexual assault victims are making stuff up. Tax cuts are for the middle class. Heh. That’s because the closest they ever come to a real middle class voter is some Wall Street broker making a million dollars a year. And now they’re lying about terrorists marching their way up through Mexico to kill us all. They’re all just lies and everyone knows it. The Republican Party has turned into the party of lies.

There used to be at least a few Republicans compassionate enough to feel bad about ripping immigrant children from their mothers. Not anymore. The ugliest, meanest parts of the Republican Party love it when Jeff Sessions takes those babies away. It gets big cheers at all those creepy rallies that Donald Trump puts on for Fox News. The Republican Party has turned into the party of hate.

Democrats believe in the rule of law. Donald Trump believes the attorney general’s job is to help his friends and punish his enemies. And what do Republicans think of this? Well, the ones in Congress sure don’t seem to have any problem with it. The Republican Party has turned into the party of corruption.

Fine. Obama isn’t going to hire me as his speechwriter anytime soon. But his kind of namby-pamby speeches just aren’t having any effect and aren’t getting any coverage. He needs to be a champion for the Democratic Party, not just for civic virtue in general. He’s in a unique position to make a single speech that can persuade people to vote for Democrats nationwide, and he’s not taking advantage of it. This was one of his biggest failures in office, and now he’s repeating it.

Obama needs to stand up for his party and start really telling the truth about Republicans. Why won’t he?