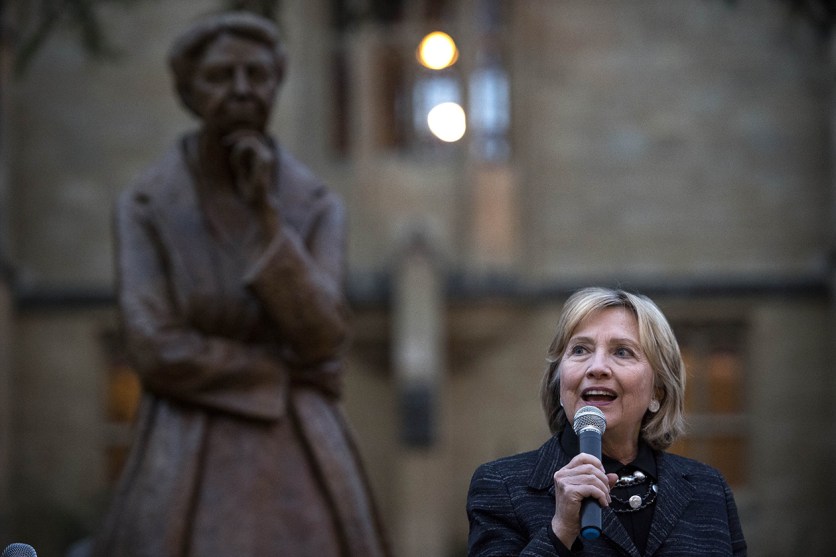 Hillary Clinton unveils a new statue of Eleanor Roosevelt outside the Bonavero Institute in Oxford.Victoria Jones/PA Wire via ZUMA

This is not a symmetrical problem. We should be clear about this: The increasing radicalism and irresponsibility of the Republican Party, including decades of demeaning government, demonizing Democrats, and debasing norms, is what gave us Donald Trump. Whether it was abusing the filibuster and stealing a Supreme Court seat, gerrymandering congressional districts to disenfranchise African Americans, or muzzling government climate scientists, Republicans were undermining American democracy long before Trump made it to the Oval Office. Now we must do all we can to save our democracy.

Yesterday CNN asked about the swearing-in ceremony for Brett Kavanaugh:

“What was done last night in the White House was a political rally. It further undermined the image and integrity of the court,” Clinton, Trump’s Democratic 2016 election opponent, told CNN’s Christiane Amanpour in an exclusive interview….”But the President’s been true to form,” she continued. “He has insulted, attacked, demeaned women throughout the campaign — really for many years leading up to the campaign. And he’s continued to do that inside the White House.”

….The former secretary of state also told Amanpour that Democrats need to draw a hard line against Republicans. “You cannot be civil with a political party that wants to destroy what you stand for, what you care about,” she said. “That’s why I believe, if we are fortunate enough to win back the House and or the Senate, that’s when civility can start again.”

“But until then, the only thing Republicans seem to recognize is strength,” she said.

Good for Hillary! But I have sad news to report. Kellyanne Conway is upset:

“I don’t like the implications there,” she said. “It’s one thing to call us deplorable, irredeemable, laugh at people who don’t have all the privileges that she has had with her Ivy League law degree and her marriage to a much more popular man who was actually was a two-term president that she’ll never be. . . . I don’t like that kind of talk. I avoid it.”

….“I think it’s not just unfortunate and graceless, but a little bit dangerous, and I would ask her to check that,” Conway said.

The mind reels. As for Hillary Clinton, she should just keep doing what she’s doing. Kellyanne Conway may be afraid that eventually the press will widely report what Hillary is saying—I wasn’t personally aware of it until the Post put Conway’s complaints on the front page—but that’s a reason to speak louder, not to shut up.