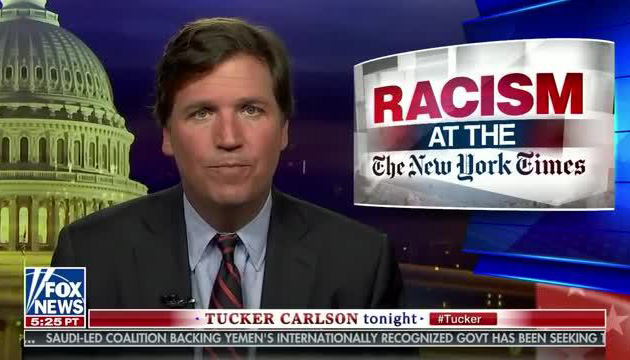 Welcome to the New York Times, Sarah! Now, instead of random fuckwits on Twitter, you have to put up with smarmy, extremely well-paid fuckwits on Fox News. Life is such a bowl of cherries, isn't it?Fox News Channel

The latest identity politics micro outrage is about Sarah Jeong, a technology writer who will soon be joining the New York Times editorial board. She went to Berkeley and Harvard Law, where she edited the Harvard Journal of Law & Gender, and probably has an IQ of a million or so. Basically, she’s the kind of person who was crafted in a test tube from birth to join the New York Times editorial board.

But she’s also been in lots of Twitter fights over the years and she has a pretty acid sense of humor. Naturally this means she has a huge archive of tweets saying things like, oh, “White men are bullshit.” That’s really the only example you need. The other zillion or so tweets, mostly in response to bullshit white men who were trolling her, are along the same lines.

Now, I couldn’t really care less about this. It’s just more right-wing faux outrage culture, and I guess all my outrage is focused like a laser on Donald Trump and the Republican Party these days. The rest of you can do whatever you want as long as you clean up after yourselves. Unfortunately, Sarahgate’s life has been extended a few extra minutes because it’s Friday and Andrew Sullivan decided to write about it. Unlike the rest of you, I kind of like reading Sullivan even if he does sometimes write the most cackhanded stuff imaginable, and naturally he decided to make the case that Jeong is an unrepentant racist who has no place at the Times. I mean, what if she had said all that stuff about black people?!?

But the alternative view — that of today’s political left — is that Jeong definitionally cannot be racist, because she’s both a woman and a racial minority. Racism against whites, in this neo-Marxist view, just “isn’t a thing” — just as misandry literally cannot exist at all. And this is because, in this paradigm, racism has nothing to do with a person’s willingness to pre-judge people by the color of their skin, or to make broad, ugly generalizations about whole groups of people, based on hoary stereotypes. Rather, racism is entirely institutional and systemic, a function of power, and therefore it can only be expressed by the powerful — i.e., primarily white, straight men.

Now, everyone take a deep breath. I know you hate Sullivan, but try to put it out of your mind and pretend that this text emerged fully written from the forehead of Zeus. Also, put Jeong out of your mind. The rest of this post is generic and has nothing to do with her. So here’s the question: Is Sullivan correct?

Personally, I think he’s 180 degrees backward. Anybody can be racist. This is so obvious that I hardly feel like wasting words explaining it. However, you can only really be racist toward nonwhites.¹ Within limits, you can say just about anything you want about whites—and especially white men—and it’s not racist. It’s just mockery of the ruling elite, the second-oldest pastime of the human race. Unfortunately, one of the big problems of our grand and tolerant era is that we can no longer say that white men are universally part of the dominant clan in America—unlike the past, when all but the very lowliest white man could still consider himself at least a tiny affiliate of the ruling class. Maybe his domain extended no further than the ability to call a shoeshine guy “boy,” but that was something, at least.

But this isn’t true anymore. Sure, white men all have a certain amount of racial privilege that they may not even be aware of, but that’s not the be-all of human existence. You can have this modest amount of privilege and still have it overwhelmed by the fact that you really are at the bottom of the food chain. You don’t get to boss your wife around just to show who wears the pants in the family. Maybe you don’t even have a wife. You don’t automatically get a job at the factory before any of the blacks or Hispanics. The Asian guy across the street might make more money than you and his kid might be captain of the basketball team. The local Elks club allowed blacks in long ago, but they don’t want you because you don’t pay your dues or your bar tab reliably. If you have a job, your boss might well be a black guy. Or even a black woman. Ditto for your landlord, the cop who pulls you over for speeding, or the owner of the store who has to decide whether to give you a break and put some groceries on credit.

So who can you mock these days? The answer is that punching up is OK but punching down isn’t, so you’re free to mock all the white men who still run the country. But who are they? What’s the word for them?

This is the problem. God knows, white men generally deserve some mockery. But no matter how bigoted or stupid they are, it’s not kosher to mock folks who are several rungs down the social and economic ladder from you. You can discuss them, you can analyze them, you can criticize their views, and you can debate about how best to enlighten them. But mockery really is just a hair too close to the whole basket of attitudes that comprise standard issue de facto racism.²

So how do you mock white men without including an awful lot of narrow-minded punching down? I’m not sure it’s possible anymore. Any ideas?

¹Needless to say, all of this is in the context of American racism. Other countries have all kinds of other tribal intolerances.

²Not de jure racism. Jim Crow, apartheid, and other legally enforced regimes of racism are a whole different thing.