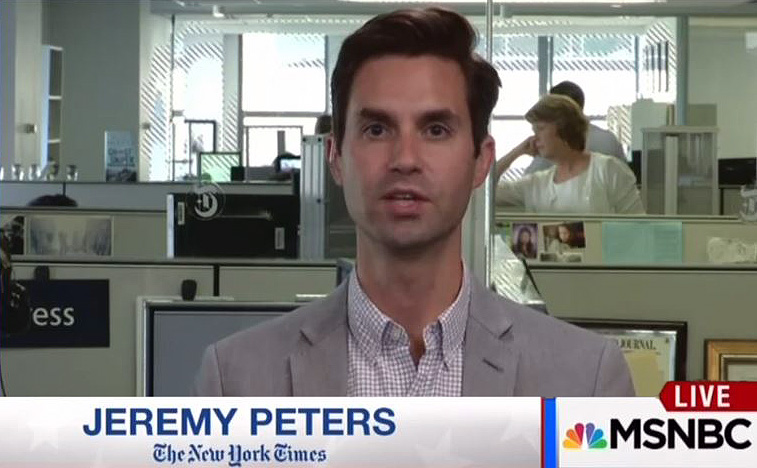 Over the weekend, Jeremy Peters of the New York Times published a piece about Trump supporters in Virginia. His first interview subject was “a Republican from suburban Loudoun County, Va., with a law degree, a business career, and not a stitch of ‘Make America Great Again’ gear in her wardrobe,” which makes it sound very much like she’s just a mildly-engaged, middle-of-the-road conservative who’s on the fence about Donald Trump. As it turns out, she’s campaigned for Ron Paul in the past and belongs to the board of a PAC dedicated to keeping Confederate monuments standing. She’s perhaps not the political neophyte he paints her as.

A whole bunch of people pointed this out on Twitter, but Peters kept digging himself in deeper instead of just acknowledging that he made a smallish mistake and maybe revising his lead. In other words, a standard Twitter outrage mob and a standard New York Times refusal to ever admit a mistake. I didn’t really care about it until I read an interview Peters did with Isaac Chotiner at Slate, where he claimed that his critics don’t understand conservatives. Then we get this:

We fact check these people constantly. There was an anecdote in my story about that tweet from [former Obama speechwriter] Jon Favreau a few weeks ago, where he incorrectly tweeted out a picture of migrant kids who were sleeping in a cage saying this is happening right now, when in fact it was from 2014, when Obama was president. It was stuff like that, picking up anecdotes like that, that is really instructive. I didn’t realize how big a deal that was on the right, and how much coverage and attention it got from conservative media. There must have been a half dozen people that we interviewed who mentioned that tweet. For them, it totally confirmed all their suspicions. And incorrectly, by the way. He apologized. He took it down and explained he was wrong.

I don’t know Peters and have no opinion about him. But someone who apparently doesn’t realize how trivia like this routinely metastasizes on the right—especially someone whose beat is the conservative movement—should be very careful about accusing others of not understanding conservatives. The Favreau tweet was bog-ordinary Fox/Rush/Breitbart fodder, and no one who covers politics should be surprised that a bunch of rank-and-file conservatives would all bring it up. Peters shouldn’t have treated it like an epiphany that delivers a rare insight into the current political moment.

There are times when I think all political reporters should be forced to watch Fox News for an hour per day. Or listen to Rush for an hour. Or something. An awful lot of them, no matter how personally disdainful they may be of right-wing news outlets, still seem to not really get it. But then again, I can’t bring myself to listen to Fox for an hour a day, so who am I to talk?