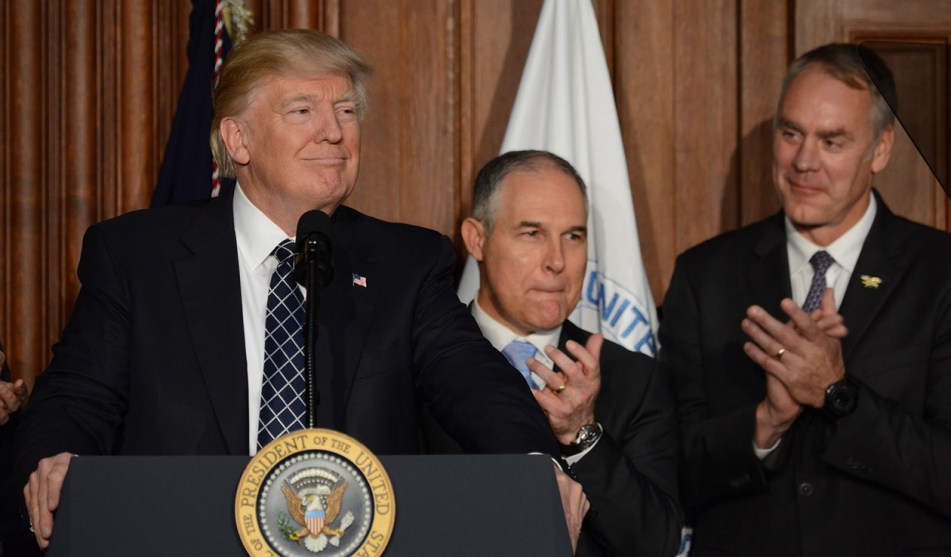 Meanwhile, the president’s most corrupt underlings are engaged in a brutal war of all-against-all. Over at the Atlantic, Elaina Plott reports that an aide to Scott Pruitt tried to push a damaging story about Ryan Zinke in order to get the spotlight off of Pruitt’s own massive corruption problems:

In the last week, a member of Pruitt’s press team, Michael Abboud, has been shopping negative stories about Zinke to multiple outlets, according to two sources with direct knowledge of the efforts, as well as correspondence reviewed by The Atlantic….The stories were shopped with the intention of “taking the heat off of Pruitt,” the sources said.

….Abboud alleged to reporters that an Interior staffer conspired with former EPA deputy chief of staff Kevin Chmielewski to leak damaging information about the EPA, as part of a rivalry between Zinke and Pruitt. The collaboration, Abboud claimed, allowed the Interior staffer to prop up Zinke at the expense of Pruitt, and Chmielewski to “get back” at his former boss.

….It is unclear the extent to which Pruitt was aware of these events. Even so, the message from PPO, according to the senior official, was: “Basically, y’all are in trouble.” A White House official with knowledge of the events added: “Absolutely nothing Scott Pruitt did would surprise me.” Heather Swift, a spokeswoman for Interior, and Raj Shah, a spokesman for the White House, both declined to comment.

In case you’re confused, the story is that Zinke planned to leak damaging information about Pruitt. So Pruitt then leaked that story in order to damage Zinke.

As for whether Pruitt was aware of these events, give me a break. Hell, it was probably his idea. Pruitt is now at the center of so many corruption allegations that I can’t even keep track of them, and his defense for every one of them has been that it was somebody else’s fault and he had no idea what was going on. Nobody with two brain cells to rub together believes him. Why believe him this time?

Just a wild guess here, but I’m thinking that Trump has not only done something wrong, but he’s done so many things wrong that he can’t even keep them straight. Thus a perjury trap remains a live possibility.

Anyway, it’s kind of funny that Republicans are so disturbed by perjury traps these days. They seemed to think they were great fun back in 1998.

Oh, and one other thing. Sarah Huckabee Sanders, who was so affronted at being called a liar at the WHCD last weekend, has been lying about Stormy Daniels all along too. Or maybe Trump has been lying to her. Who knows? In any case, she’s refusing to comment about it. I think this is probably a smart move.