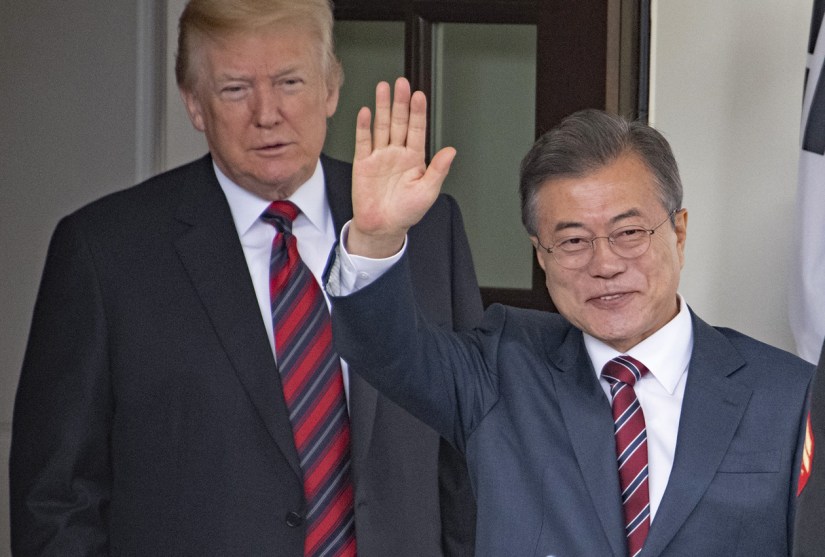 Trump, who has pitched himself as the ultimate negotiator, has focused on ambitious deals as president but has struggled with the fine print….Supporters stress that sometimes Trump’s ambitious efforts do pay off, as with the massive tax cut bill he signed into law late last year.

Going into the North Korea meeting, senior administration officials say, the president has been almost singularly focused on the pageantry of the summit —including the suspenseful roll-out of details. He has not been deeply engaged in briefing materials on North Korea’s nuclear program, said three people with knowledge of the White House efforts….Driven by gut instinct, Trump rarely dives deep as he prepares to meet with foreign counterparts. For the North Korea meeting, insiders say, he is motivated by the idea of scoring a historic deal and is tickled by suggestions he could win a Nobel Peace Prize — especially since Barack Obama won the honor early in his presidency.

FFS. Trump had nothing to do with the tax cut. He was, as Grover Norquist once put it so pungently, merely a human-shaped object with “enough working digits to handle a pen.” The tax cut would have passed if Mickey Mouse had occupied the Oval Office.

So that leaves zero ambitious deals that Trump has negotiated. It’s not for lack of trying, either. He tried to repeal Obamacare. He tried to negotate on DACA. He tried to declare a trade war on China. He tried to bully Mexico and Canada into ripping up NAFTA and starting over. He tried to persuade Russia to deal with him on Syria. He failed in every case because he had no idea what he was doing; what the other side wanted; or how to get there. He just wanted to make a loud threat and then declare victory, and the result has been nothing but a trail of wreckage in his wake. No one in America of either party trusts him any longer, and neither does any country in the world—with the peculiar quasi-exceptions of Israel and Saudi Arabia.¹

Anyway, now North Korea is up. Everyone with more than a marble or two clattering around inside their skull knows that Kim Jong-un is never going to give up his nukes. No one except Donald Trump, that is. And I guess even he’s starting to get the message:

President Donald Trump said a planned June 12 summit in Singapore with North Korean leader Kim Jong Un “may not work out,” adding if it doesn’t happen then “maybe it would in the future.”

I sure hope Republicans get their money’s worth in judicial appointments from supporting this cretin. I never realized that selling your soul came so cheap.

¹Why “quasi”? Because as near as I can tell, both countries trust that Trump is on their side, but both also have nothing but contempt for him. They figure they can gull him into doing what they want and ignore his idiot son-in-law, and that’s good enough.