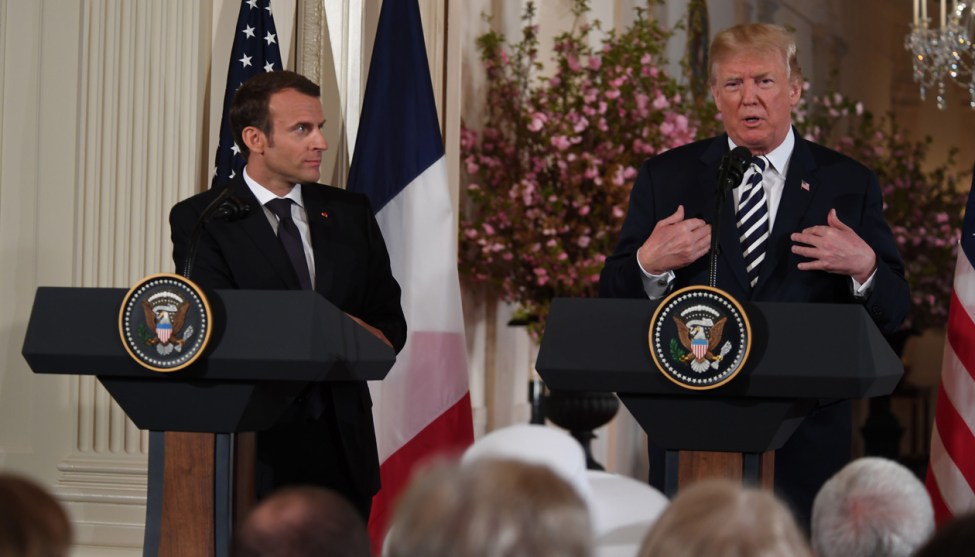 "Sacre bleu, what is this moron saying now? Please, not more about the crates of cash. OMG. Now it's barrels of cash. Nobody ever told me Trump was going to be part of this job."Christy Bowe/Globe Photos via ZUMA

Over lunch I was chatting with a friend and we were wondering what Donald Trump really wants to do about Syria. Does he want to get out? If so, why hire guys like John Bolton, who’d probably like to send a million troops over?

As far as Syria is concerned, I would love to get out. I’d love to bring our incredible warriors back home. They’ve done a great job. We’ve essentially just absolutely obliterated ISIS in Iraq and in Syria. And we’ve done a big favor to neighboring countries, frankly, but we’ve also done a favor for our country.

But wait. Maybe we need to stay after all:

With that being said, Emmanuel and myself have discussed the fact that we don’t want to give Iran open season to the Mediterranean, especially since we really control it. To a large extent, we really have controlled it and we’ve set control on it. So we’ll see what happens.

No no no. Just kidding. We’re getting out:

But we’re going to be coming home relatively soon. We finished, at least, almost our work with respect to ISIS in Syria, ISIS in Iraq, and we have done a job that nobody has been able to do. But with that being said, I do want to come home.

Although first we have to accomplish some things:

But I want to come home also with having accomplished what we have to accomplish. So we are discussing Syria as part of an overall deal. When they made the Iran deal, what they should have done is included Syria.

And now a brief interruption from our lizard brain:

But back to the topic at hand. We’re getting out. Honest:

So we want to come home. We’ll be coming home.

But we want to have a very, very strong — we want to leave a strong and lasting footprint, and that was a very big part of our discussion. Okay? Thank you.

So…we’re coming home but not before we leave a strong and lasting footprint. Roger that.