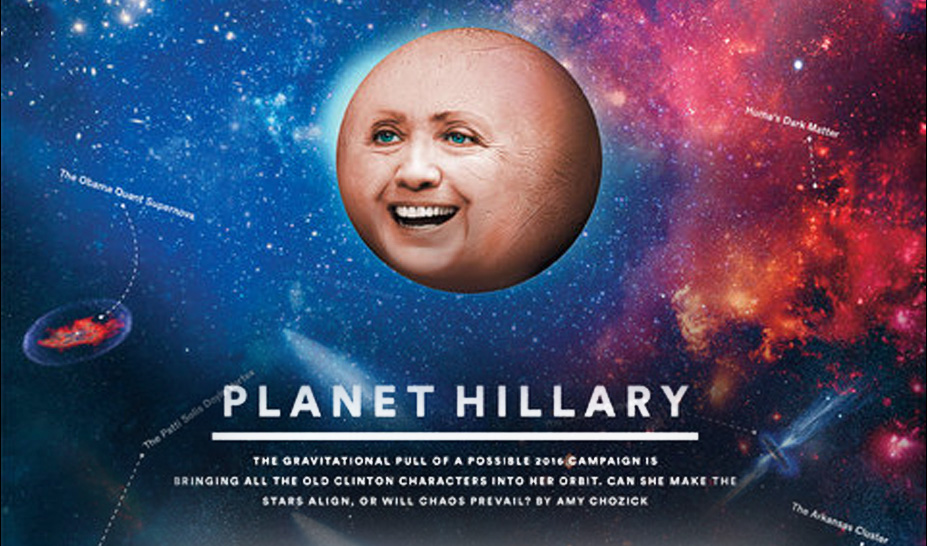 Amy Chozick, who has covered Hillary Clinton on a daily basis for the New York Times since 2013, recounts what happened on Election Day when Clinton realized she wasn’t going to win:

“I knew it. I knew this would happen to me,” she said, now within a couple of inches of Mr. Mook’s ashen face. “They were never going to let me be president.”

….I figured that if anyone knew whom Mrs. Clinton was referring to with that insidious “they” that, like some invisible army of adversaries (real and imagined), wielded its collective power and caused her to lose the most winnable presidential election in modern history, it was me.

They were the vast-right wing conspiracy. They were the patriarchy that could never let an ambitious former first lady finally shatter “that highest, hardest glass ceiling.” They were the people of Wisconsin and James Comey. They were white suburban women who would rather vote for a man who bragged about sexual assault than a woman who seemed an affront to who they were. And yes, they were political reporters (“big egos and no brains,” she called us) hounding her about her emails and transfixed by the spectacle of the first reality TV show candidate.

But wait. This story evolves into something more interesting. It starts on October 7, the day the Access Hollywood tape was leaked. That was also the day that Wikileaks released hacked emails that included excerpts from Clinton’s infamous Wall Street speeches:

Mrs. Clinton’s refusal to release the speeches had been such a cause célèbre in the Democratic primary that I regularly saw protesters holding signs that said, “I’d rather be at home reading your Goldman Sachs speeches.” Now the juicy parts of this most sought-after trove of documents had landed in our laps.

But it wasn’t a scoop. It was more like a bank heist. Editors and reporters huddled to discuss how to handle the hack. Everyone agreed that since the emails were already out there — and of importance to voters — it was The Times’s job to “confirm” and “contextualize” them. I didn’t argue that it appeared the emails were stolen by a hostile foreign government that had staged an attack on our electoral system. I didn’t push to hold off on publishing them until we could have a less harried discussion. I didn’t raise the possibility that we’d become puppets in Vladimir Putin’s master plan. I chose the byline.

In December, after the election, my colleagues in Washington wrote a Pulitzer-winning article about how the Russians had pulled off the perfect hack. I was on the F train on my way to the newsroom when I read it. I had no new assignment yet and still existed in a kind of postelection fog that took months to lift. I must’ve read this line 15 times: “Every major publication, including The Times, published multiple stories citing the D.N.C. and Podesta emails posted by WikiLeaks, becoming a de facto instrument of Russian intelligence.

The Bernie Bros and Mr. Trump’s Twitter trolls had called me a donkey-faced whore and a Hillary shill, but nothing hurt worse than my own colleagues calling me a de facto instrument of Russian intelligence. The worst part was, they were right.

….[Now] I’ve started to see the “they” she spoke about on election night differently. They were Facebook algorithms and data breaches. They were Fake News drummed up by Vladimir Putin’s army. They were shadowy hackers who stole her campaign chairman’s emails hoping to weaken our democracy with Mr. Podesta’s risotto recipe. They were The Times and me and all the other journalists who covered those stolen emails.

Chozick doesn’t mention the biggest “they” of all, though: the carefully orchestrated Republican campaign to keep Clinton’s State Department emails in the news, and the reporters who covered every one of those orchestrated twists and turns as major events. I would very much like to see an accounting of this that doesn’t just wave it off with “Are you saying we shouldn’t have covered the emails?” The question has never been whether news outlets should have covered the emails. Of course they should have. The question is whether they should have been patsies who covered them relentlessly no matter how trivial each new daily leak was.

But that’s just bitterness speaking. I’m genuinely grateful that Chozick wrote what she did. I don’t think it will change anything—I expect the same tsunami of crap in 2020 and I expect it will be covered the same way—but it’s nice to see someone acknowledge it. It’s a start.