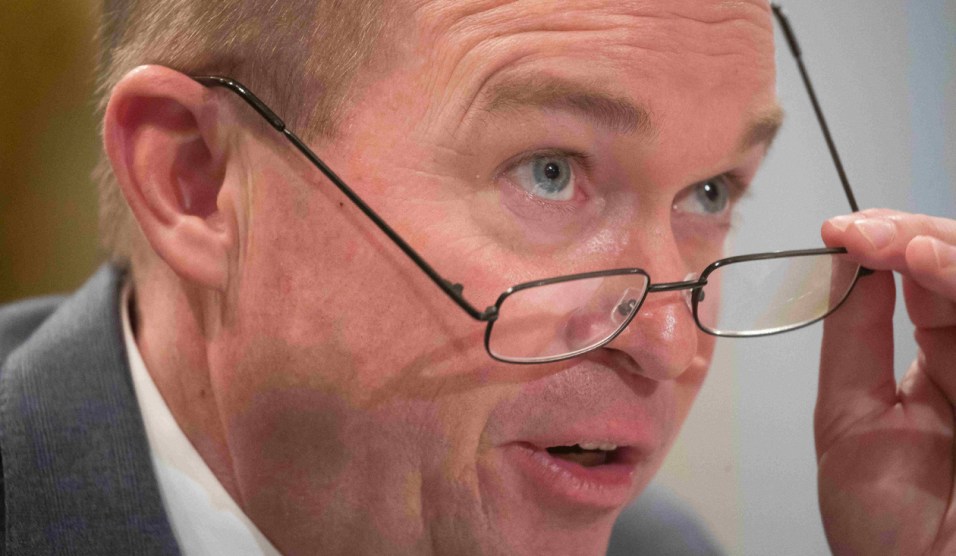 Politico reports on an obscure bureaucratic struggle currently taking place behind the scenes:

The White House is poised to give its budget office greater control over some of the Treasury Department’s regulations, handing budget director Mick Mulvaney a victory in a months-long power struggle with Treasury Secretary Steven Mnuchin, according to three sources familiar with the discussions.

….The highly sensitive debate has consumed the attention of top officials at both agencies. At stake is the final say over IRS regulations — and the implementation of the Republicans’ tax law….Downtown lobbyists have been keenly tracking the debate as they seek to influence the outcome of the new tax law. The move raises the possibility that key regulations surrounding the law — especially on the nuances of the international rules and the taxation of certain types of businesses — could be delayed if they must pass through both Treasury and OMB’s Office of Information and Regulatory Affairs.

Nearly all federal agency regulations are reviewed by OMB, which typically does a cost-benefit analysis before recommending whether they should be approved. Conservatives like this because cost-benefit analyses are fairly easy to tweak, thus making it easier to kill off regulatory proposals. And since OMB is part of the White House, its decisions tend to be more overtly political than those of bureaucrats in the agencies. For conservatives, OMB review is a good way of keeping a close eye on all those radical lefties in the Deep State who are constantly trying to expand the scope of government meddling in the ability of God-fearing corporate executives to make money.

IRS regulations, however, are different. They’ve never been part of the OMB review process because they aren’t supposed to be influenced by cost-benefit calculations. They’re supposed to represent the IRS’s best technical expertise regarding how tax law is meant to work. So what’s the point of having a second review by OMB?

“The OMB is good at doing cost benefit, but they are not good at doing tax. They have no experience whatsoever in tax law,” said Mark Mazur, former assistant secretary for tax policy at Treasury and director of the nonpartisan Urban-Brookings Tax Policy Center. “In order to do a good job, they would have to hire 20 tax attorneys, which is what Treasury already does. You are duplicating the assets that you already have.”

Obviously OMB Director Mick Mulvaney wants more authority over tax law interpretation. But why? As always, cui bono is our guide to answering this question.