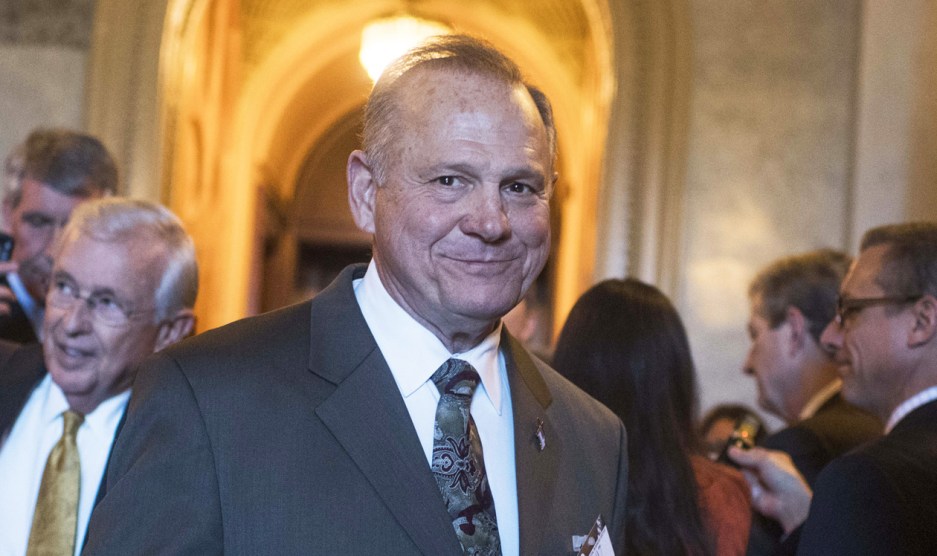 The Washington Post has a bombshell accusation against Roy Moore, the Republican candidate for senator in Alabama. Leigh Corfman says that four decades ago, when she was 14, Moore struck up a conversation on a park bench and then offered to look after her while her mother went into the courthouse for a child custody hearing:

Alone with Corfman, Moore chatted with her and asked for her phone number, she says. Days later, she says, he picked her up around the corner from her house in Gadsden, drove her about 30 minutes to his home in the woods, told her how pretty she was and kissed her. On a second visit, she says, he took off her shirt and pants and removed his clothes. He touched her over her bra and underpants, she says, and guided her hand to touch him over his underwear.

“I wanted it over with — I wanted out,” she remembers thinking. “Please just get this over with. Whatever this is, just get it over.” Corfman says she asked Moore to take her home, and he did.

Corfman’s mother confirms this, as do two of her childhood friends. The Post adds this: “Three other women interviewed by The Washington Post in recent weeks say Moore pursued them when they were between the ages of 16 and 18 and he was in his early 30s, episodes they say they found flattering at the time, but troubling as they got older. None of the women say that Moore forced them into any sort of relationship or sexual contact.”

BREAKING: MCCONNELL on Roy Moore: “If these allegations are true, he must step aside.” pic.twitter.com/onUoPG1NIA

Moore says the allegations are “completely false and are a desperate political attack by the National Democrat Party and the Washington Post on this campaign.” The Post says its story is based on interviews with “more than 30 people who said they knew Moore between 1977 and 1982, when he served as an assistant district attorney for Etowah County in northern Alabama.” Also this: “Neither Corfman nor any of the other women sought out The Post….All were initially reluctant to speak publicly but chose to do so after multiple interviews, saying they thought it was important for people to know about their interactions with Moore. The women say they don’t know one another.”