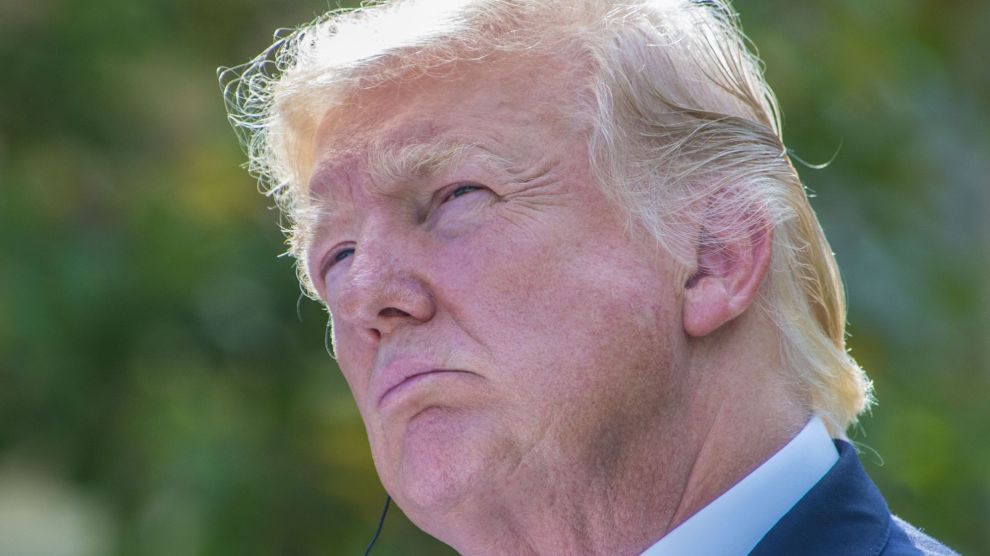 While Kevin’s on vacation, we’ve invited other Mother Jones writers to contribute posts.

On Wednesday, President Donald Trump said he will not personally benefit from his new tax plan. He, of course, didn’t mention that the plan eliminates a provision that cost him $31 million in 2005—one of a just a handful of years for which any of the president’s tax information is publicly available.

“My plan is for the working people,” he boasted, “and I think very, very strongly, there’s very little benefit [in it] for people of wealth.”

But back of the envelope math suggests the truth is that working-class Americans with kids could actually pay more, or negligibly less, under Trump’s plan.

While administration officials have pledged everyone will end up getting a tax cut, the framework they’ve released is selectively specific: It clearly states how to cut taxes for the wealthiest Americans, while leaving the details of working-class tax cuts exceedingly vague.

Trump’s plan reduces the seven tax brackets that exist today, which range from 10 percent to 39.6 percent, into just three brackets of 12, 25, and 35 percent. (Republicans have said they may add a fourth higher bracket.)

While the plan technically doubles the standard deduction to $12,000 for individuals and $24,000 for couples, it, as Josh Barro and Daniel Hemel have pointed out, also eliminates personal exemptions of $4,050 per adult and child that are currently tacked on to the existing, smaller standard deductions. When those exemptions are taken away, the much-hailed doubled deduction packs a lot less punch.

As a result, a married couple with two children making $50,000 per year would see their income taxes increase by nearly $900 under Trump’s plan. Republicans counter that they will “significantly” increase the current tax credit of $1,000 per child, but have yet to specify an amount. A June 2016 House Republican tax plan increased the credit by $500. If Republicans stick to that, that married couple would get a roughly $110 tax cut.

People without kids fare a bit better, because they currently only claim one of the personal exemptions proposed for elimination, while their standard deduction would still double. An individual making $35,000 per year, for example, would save about $460.

Regardless of Trump’s claims, the wealthiest Americans will benefit much more from his proposed tax plan than working Americans. A preliminary analysis from the left-leaning Center on Budget and Policy Priorities estimates that the top one percent of households would save about $150,000 per year—roughly 325 times what someone earning $35,000 would get. About 30 percent of all savings would go to households making over $3.8 million per year, with each getting and average annual tax cut of $800,000.