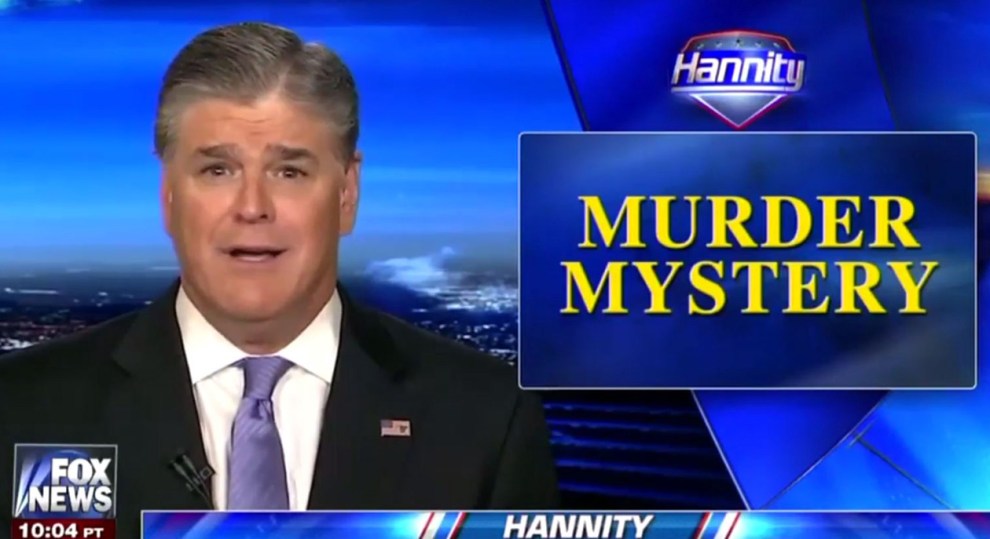 Last year, DNC staffer Seth Rich was shot to death near his home in Washington DC. In May, Fox News ran a segment suggesting that Rich had provided Wikileaks with internal DNC emails, and was rubbed out in retaliation. Because, you know, that’s the kind of thing the DNC would do. Sean Hannity was all over this for days and days until Fox finally retracted the story.

Now, private investigator Rod Wheeler, who was a source for the story, is suing Fox. He alleges that he was falsely quoted, and that Fox originally ran the story at the behest of the White House. NPR has the story:

The Fox News Channel and a wealthy supporter of President Trump worked in concert under the watchful eye of the White House to concoct a story about the death of a young Democratic National Committee aide, according to a lawsuit filed Tuesday….Wheeler alleges Fox News and the Trump supporter intended to deflect public attention from growing concern about the administration’s ties to the Russian government. His suit charges that a Fox News reporter created quotations out of thin air and attributed them to him to propel her story.

….The lawsuit focuses particular attention on the role of the Trump supporter, Ed Butowsky, in weaving the story….On April 20, a month before the story ran, Butowsky and Wheeler — the investor and the investigator — met at the White House with then-press secretary Sean Spicer to brief him on what they were uncovering. The first page of the lawsuit quotes a voicemail and text from Butowsky boasting that President Trump himself had reviewed drafts of the Fox News story just before it went to air and was published.

Butowski was one of the big Benghazi conspiracy theorists, but as you might expect, he now says was just joshing around about Trump reviewing the story. Spicer says the meeting with Butowski was just some routine stroking of a big donor. Nothing to see here, folks.

But then again, maybe there is:

Lawsuit DEFINITELY designed to be incendiary. But here’s key detail: Wheeler (no relation) has written records of what he actually said. pic.twitter.com/rI29z3akcb

Here’s where the guy who said he’s behind everything we know about Benghazi says he has no credibility.

He said it–not me! pic.twitter.com/LA9vOGmuPg

Oops. Wheeler (still no relation) has both Zimmerman and Butowsky on the record admitting he didn’t provide those quotes. pic.twitter.com/IqTBatG0tw

The trial should be a fun evisceration of Fox News, even if Spicer and Trump don’t end up on the stand. Stay tuned.

¹Nice use of scare quotes here from the Daily Beast.