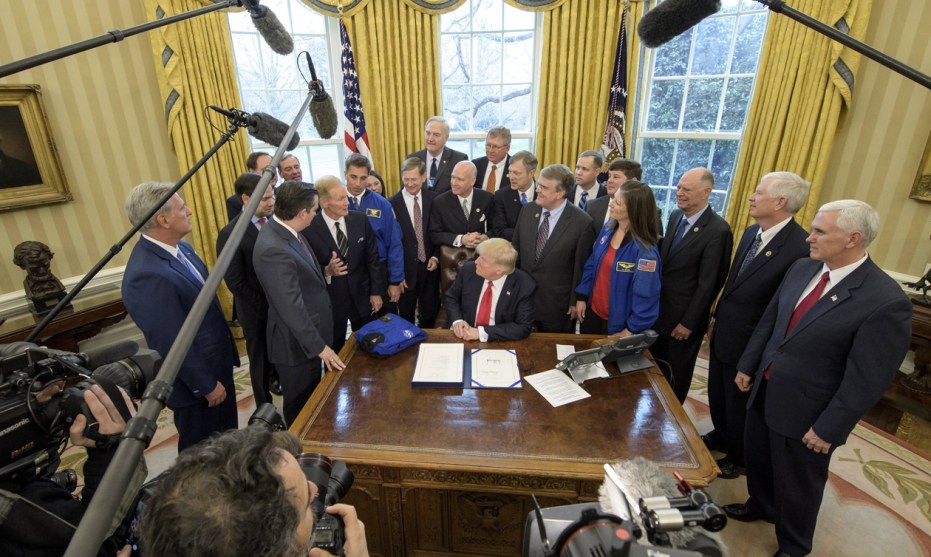 I haven’t quite made sense of the latest Russia news, which is why I haven’t written about it. The news itself is easy enough to digest—some new emails about the Trump Organization pursuing a deal in Moscow while Trump was running for president—but I can’t quite figure out how much of it is really new and how much of it is really important. I’ll let you know when I’ve made up my mind.

In other news, Trump is getting some flak for his performance during a press conference with the Finnish president. After taking two questions each from American and Finnish reporters, Trump suggested they take a couple more:

A visibly surprised Niinisto obliged and gestured to a third Finnish journalist. “Please,” he said.

“Again?” said Trump, mistaking the woman for another female reporter who had asked a question earlier in the news conference. “You’re gonna give her — the same one?”

“No, she is not the same lady,” Niinistö replied. “They are sitting side by side.”

“We have a lot of blond women in Finland,” the reporter interjected.

True enough. And as presidential gaffes go, this was pretty minor. Then again, it is always politically inadvisable to suggest that all (insert historically marginalized demographic group here) look the same. This principle certainly applies to Trump, a magnet for charges of sexism and racism.

Seriously? Blond white women are a historically marginalized demographic group? And it’s somehow a problem to confuse two of them if you’re a “a magnet for charges of sexism and racism”? I’m willing to slam Trump for just about anything these days, but this is really stretching, folks.

On the other hand, Trump’s love of Oval Office photographs really does reveal something about his personality:

He tells aides, from senior White House advisers to his private bodyguard, Keith Schiller, to snap the photos on cellphones, or he shouts for Shealah Craighead, the official White House photographer, to come in. The often impatient president will sometimes pose for several minutes per sitting, taking variations of a photo with a single group. He even stands with people to inspect the photos.

….Several advisers and aides say Trump appears happiest when showing off the Oval Office, almost seeing it as the ultimate prize, just as he once showed off his celebrity photos, trophies and other memorabilia, such as Shaquille O’Neal’s shoes, at Trump Tower.

….But Trump also uses the photo sessions to assert his dominance over visitors. He doesn’t accept no for an answer, repeatedly encouraging people reluctant to pose, including reporters and others who may feel uncomfortable taking photos with the president. One business executive said everyone knew the picture was a demand in a recent meeting, even though some other executives said they felt squeamish afterward because the photos can become fodder for criticism in a polarized political era.

Also worth noting: Trump doesn’t like being on the same level as other people. His pictures—and his Oval Office meetings—are always done with him sitting behind his desk. He doesn’t just like to assert his dominance, he likes to do it in almost comical ways. The weird thing is that Trump is hypersensitive about being laughed at, but nobody seems to have the guts to tell him that everyone laughs at him for transparent stunts like this. He’s completely oblivious.

If this were just a personality quirk of an otherwise competent president, we’d all shrug. The problem is that this is all there is to Trump. When it comes to marketing and self-promotion, he’ll take all the time necessary. When it comes to the substance of the job, he can’t manage to summon the enthusiasm to read more than two bullet points. For example, here’s another excerpt from his tariff meeting a couple of weeks ago:

At one point in the meeting, Navarro pulled out a foam board chart. Trump didn’t pay attention to it, saying “I don’t even know what I’m looking at here.”

One whole chart! And Navarro made it nice and big. But Trump couldn’t be bothered to even glance at it.