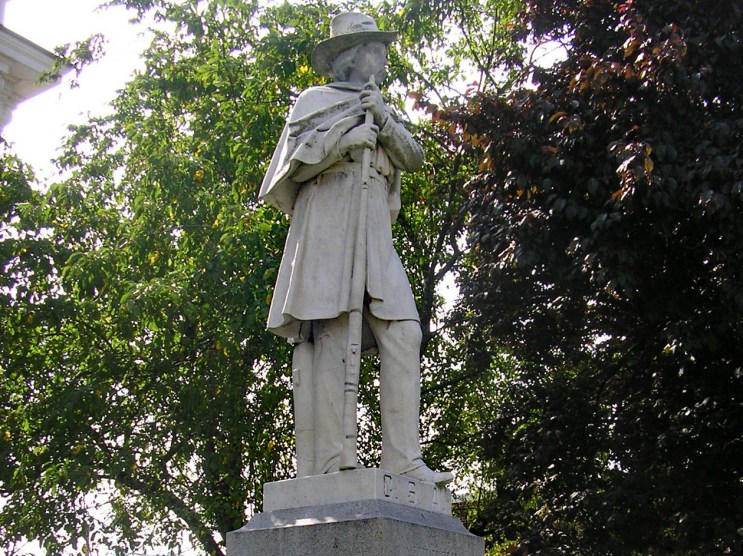 Are all those Confederate statues worth preserving as examples of public art? Let’s consider one of the most popular monuments:

Known as the “Silent Sentinel,” “Single Soldier” or similar names, the figure tops many of the thousands of Civil War monuments to be found in more than 30 states….Estimates of Confederate monuments range between 500 and 1,000, including hundreds of the rebel version of the solitary soldier.

“In Georgia, there must be one in practically every county in every town square and cemetery, and it’s facing north, by the way,” said Ben Jones, a former Georgia congressman who played the role of Cooter on “The Dukes of Hazzard.”

And where did these statues come from?

One of the leading manufacturers was the Monumental Bronze Company of Bridgeport, Connecticut, which specialized in a cast zinc it called “white bronze” (a light gray or pale blue color)….It sold life-size statues for just $450 and larger eight-and-a-half foot versions for $750. Commissioning marble or granite statues, meanwhile, would have cost tens of thousands of dollars.

The Monumental Bronze Company mostly made cemetery headstones and markers, but they did public statuary as well. There was a version of the Silent Sentinal for northern towns and a different one for Southern towns:

Just pick something that fits your budget, and a few months later it would arrive, ready for installation. Here is Trevor Schoonmaker, chief curator at Duke University’s Nasher Museum of Art in Durham:

“You can argue that any sculpture is art in some way, but it’s a loose argument,” Schoonmaker said Tuesday. “I don’t know that these statues are worthy of preservation as art objects so much as historical objects – made to preserve a lost cause, a lost war. They weren’t made with great artistic intent, but with political intent. And intent matters in this case.”

As for intent, timing plays a part in that, too. “To Our Confederate Dead” on Hillsborough Street is less a relic of the Civil War than of the Jim Crow era of segregation, erected in 1897. That’s more than three decades after the war’s end. The statue that was taken down in Durham went up even later, in 1924.

“Look at any memorial or monument, and it’s always more about the time it was put up than the time it celebrates,” said Catherine Bishir, an architecture historian at NC State libraries. “As long as you can see when a monument was done and who did it, you have a clue what it’s all about.”

As for the bigger statues of Robert E. Lee and other Confederate heroes, they were pretty much churned off an assembly line too. They just cost more.