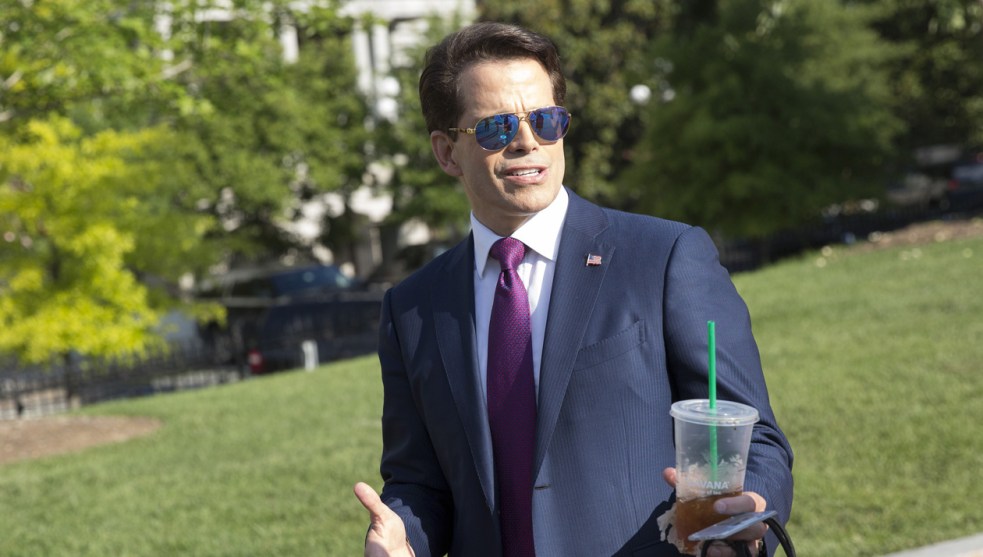 Remember when Sarah Palin came along? She was insane, but eventually her influence waned and we all breathed a sigh of relief. But then along came Donald Trump: even more insane, and he got elected president. But that’s not all. Now we have Anthony Scaramucci, Trump’s new director of communications. He might be the craziest of the lot.

Who leaked that to you?” he asked. I said I couldn’t give him that information. He responded by threatening to fire the entire White House communications staff. “What I’m going to do is, I will eliminate everyone in the comms team and we’ll start over,” he said….“You’re an American citizen, this is a major catastrophe for the American country. So I’m asking you as an American patriot to give me a sense of who leaked it.”

In Scaramucci’s view, the fact that word of the dinner had reached a reporter was evidence that his rivals in the West Wing, particularly Reince Priebus, the White House chief of staff, were plotting against him….The issue, he said, was that he believed Priebus had been worried about the dinner because he hadn’t been invited. “Reince is a fucking paranoid schizophrenic, a paranoiac,” Scaramucci said. He channelled Priebus as he spoke: “ ‘Oh, Bill Shine is coming in. Let me leak the fucking thing and see if I can cock-block these people the way I cock-blocked Scaramucci for six months.’ ”

This is bugeye nuts, and it just gets weirder. There’s no point in summarizing; you need to click the link and read it for yourself. Then this morning, while Lizza was on CNN talking about the Scaramucci call, Scaramucci himself called in. He spoke with Chris Cuomo about many things, including his delusional belief that Priebus had also leaked financial information about him, and the FBI should investigate it:

CUOMO: So should the FBI or DOJ be investigating who leaked your disclosure form?

CUOMO: Well, you talked to them about it, right?

Again, you really have to read the whole thing to get just how nuts it is. Or you can read Josh Marshall’s amusingly annotated version. But Scaramucci is more than just nuts. Here he is at his first press briefing a few days ago:

This is mostly being treated like a joke. It’s the Kim Jong-Il-ization of the president: He sets world records at Scrabble! He once hit a home run off Sandy Koufax in a pickup game! He swam to Staten Island in less than an hour!

But this is not a joke and it’s not a mistake. It was deliberate. And that’s a bigger deal than anyone is letting on. Transcripts are not supposed to be “revised” after the fact. Official White House transcripts record exactly what the person said, regardless of “what they meant to say.” Every White House has abided by that rule, including Trump’s.

Until now. And guess who’s ultimately in charge of transcripts? The White House communications director. Anthony Scaramucci. It might be wise not to fully rely on White House transcripts any more.