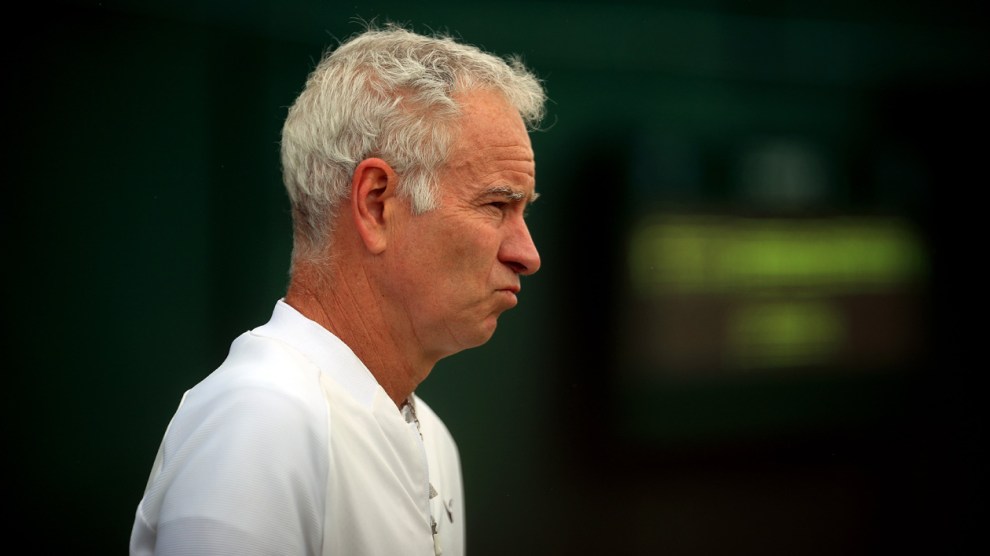 I’ve been waiting to see if anyone will defend John McEnroe against the dumb attacks he’s getting right now, and so far I haven’t seen anyone willing to risk the backlash. So what the hell. I guess I’ll do it. Here’s the NPR interview that has everyone up in arms:

GARCIA-NAVARRO: We’re talking about male players, but there [are] of course wonderful female players. Let’s talk about Serena Williams. You say she is the best female player in the world in the book.

GARCIA-NAVARRO: Some wouldn’t qualify it; some would say she’s the best player in the world. Why qualify it?

MCENROE: Oh! Uh, she’s not, you mean, the best player in the world, period?

GARCIA-NAVARRO: Yeah, the best tennis player in the world. You know, why say female player?

MCENROE: Well, because if she was in, if she played the men’s circuit, she’d be, like, 700 in the world.

McEnroe is getting slagged for insulting Serena Williams by saying she’d rank #700 on the men’s circuit. Also for the sin of thinking that female athletes have to be compared to men. And for being an idiot. Etc.

This is ridiculous. McEnroe can run his mouth with the best of them, but in this case he’s completely innocent. Just read the interview:

McEnroe didn’t bring this up out of nowhere. He wasn’t trying to say anything about Serena Williams or women’s tennis in general. He wasn’t trying to generate controversy. He was responding to a dumb question from an interviewer. I suppose he could have told the interviewer he didn’t understand what she was saying, and then asked for a clarification, but instead he just answered and moved on—or would have, anyway, except that the interviewer just wouldn’t let it go.

Since then, half the sports writers in America have proved they have too much free time on their hands by going after McEnroe. And everyone else is now chiming in too.

This is so, so tedious. Everyone knows how dominant Serena Williams has been. Everyone knows that men play a stronger game than women. It’s a matter of opinion whether Serena is the most dominant tennis player of all time. And McEnroe only mentioned this because an interviewer asked a stupid question.

Why do we have to pretend to be outraged over trivia like this? Just give it a rest, folks. There’s nothing here.

POSTSCRIPT: If you’re not mad enough at me already, here’s one more thing. In addition to everything else, Abad-Santos tweaks McEnroe for “the 700 number he seems to have pulled out of nowhere.” No he didn’t. In fact, he was probably being nice. I’d guess that the real number is more like 2000. I’d offer to argue about this with anyone who’s interested, but honestly, who cares? This is one of the dumbest “controversies” ever. If you really need an excuse to show how woke you are, pick something else.