Brad DeLong is unhappy that his faction of economists had so little influence on public policy during the Great Recession. But I think he makes a fundamental error:

Alesina and Ardagna and Reinhart and Rogoff each had more influence on what policymakers and journalists thought about the effects of fiscal policy than did Paul Krugman and company, (including me). While the Federal Reserve went full-tilt into quantitative easing (but not stamped money or helicopter money), it did so in the face of considerable know-nothing opposition. And the ECB lagged far behind in terms of even understanding its mission. Why? Because economists Taylor, Boskin, Calomiris, Lucas, Fama, and company had almost as much or even more impact as did Paul Krugman and company.

….The most salient relatively-recent example was provided by Carmen Reinhart and Kenneth Rogoff [who argued that it was risky for a country to have a debt-to-GDP ratio greater than 90 percent]….I think we have by far the better of the argument. There is no tipping point. Indeed, there is barely a correlation, and it is very hard to argue that that correlation reflects causation from high initial debt to slower subsequent growth.

Yet it is very clear that even today Reinhart and Rogoff—and allied points by economists like Alberto Alesina, Francesco Giavazzi, et al., where I also think we have the better of the argument by far—have had a much greater impact on the public debate than my side has.

Brad’s error is in thinking that any of these economists influenced public policy. They didn’t. Politicians and central bankers wanted to do certain things, so they highlighted research from economists who happened to agree with them. Roughly speaking, when Congress wanted to spend more money, it asked for testimony from the Brad DeLongs of the world. When it wanted to cut spending, it asked for testimony from the Reinharts and Rogoffs. Likewise, central banks have their own models and their own political pressures, and they responded to them. They didn’t really care what any academic economists happened to say about it.

This may sound depressing if you’re an economist. Who wants to be nothing more than a handy mouthpiece for whichever politician happens to like the policy implications of your particular beliefs? But in fact, the news isn’t so bad after all.

Brad’s post is titled, “Why Were Economists as a Group as Useless Over 2010-2014 as Over 1929-1935?” But they weren’t. If we had responded to the 2007-08 financial crisis the same way we did to the 1929-32 financial crisis, we’d still be waiting for a rerun of World War II to pull us back to normal. The reality was far less grim. We might not have responded ideally, but we responded a helluva lot better than we did in 1931. That’s why it was a Great Recession, not a Great Depression. 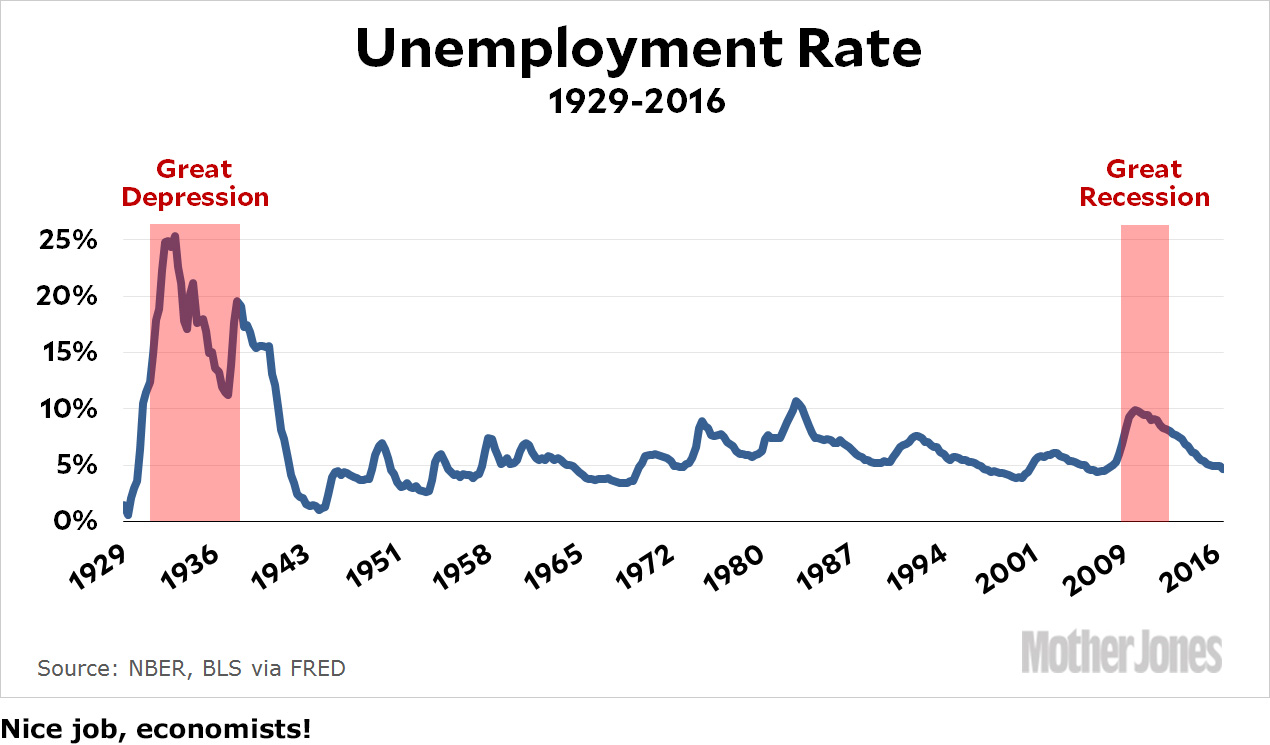 And the reason for that is economists. Over the past 70 years they’ve had a tremendous impact on public policy. Compared to 1931, even the austerians are basically ultra-liberals who are just a few degrees less ultra-liberal than DeLong and Krugman. For better or worse, economists have enormous influence, but it’s influence exercised over the course of decades. On that score, the Keynesians are overwhelming winners who have moved the center of gravity of the profession far to the left. It’s only within the current center of gravity that conservatives seemed influential on public policy in 2009-10. But that’s almost always the case. Wherever the Overton Window happens to be, the conservative end is usually ascendant. What really matters, though, is where the window is.