Donald Trump is gonna bring back the coal:

President Trump is poised in the coming days to announce his plans to dismantle the centerpiece of President Barack Obama’s climate change legacy….In an announcement that could come as soon as Thursday or as late as next month, according to people familiar with the White House’s planning, Mr. Trump will order [EPA chief Scott Pruitt] to withdraw and rewrite a set of Obama-era regulations known as the Clean Power Plan, according to a draft document obtained by The New York Times.

….At a campaign-style rally on Monday in the coal-mining state of Kentucky, Mr. Trump told a cheering audience that he is preparing an executive action that would “save our wonderful coal miners from continuing to be put out of work.”

This is part of Trump’s plan to repeal all of Obama’s “stupid” climate change policies. “We’re not spending money on that anymore,” Trump’s budget director told reporters. No more funding for climate change science; no more worrying about carbon emissions; no more auto mileage standards; and lots and lots of beautiful, black coal.

Except for one thing: 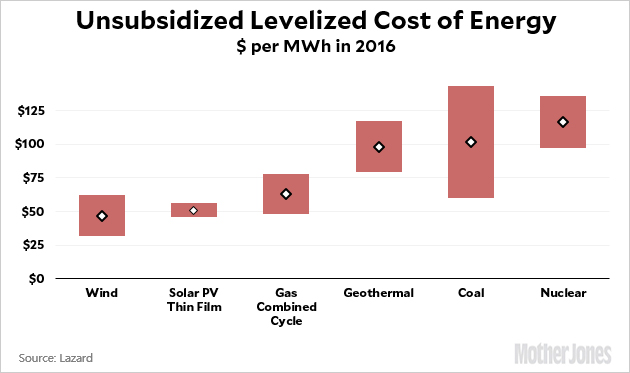 This is from Lazard’s most recent energy analysis. Coal just isn’t competitive anymore. Oh, existing plants will keep going for a while, and maybe Trump’s executive orders—if they ever go into effect—will keep them in operation longer than otherwise. But there’s nothing on the horizon that’s likely to reduce the cost of coal, whereas wind and solar continue to drop every year. Gas is also likely to stay cheap for a long time thanks to fracking.

None of this is a secret. Everyone knows that Trump isn’t going to save any coal jobs, but the coal miners like to hear him say that he will. Based on previous reporting, I gather that even they know it’s mostly blather, but they still appreciate it. They give Trump an A for effort.

Back in the early part of last year, there was a mini-upwelling of comments from liberals suggesting that Trump might actually be better from a progressive point of view than more conventional conservatives like Marco Rubio and Ted Cruz. That was never true, and climate change is an example of why. Cruz or Rubio would have both tried to get rid of Obama’s Clean Power Plan, but I don’t think they would have literally tried to defund every bit of research into climate change or just flatly deny that carbon even mattered. They’re too conventional. But with Trump there’s always the danger that a combination of his signature ignorance and his rabid vengefulness will motivate him to go nuts. That’s what’s happening here. On the bright side, maybe his well-known incompetence will also keep him from being effective. But then again, maybe not.