One of the surprising things about the CBO score of AHCA, the Republican health care bill, is their conclusion that premiums will fall starting in 2020. By 2026, average premiums will be 10 percent lower than they would be under Obamacare. But why? Here’s CBO:

First, the mix of people enrolled in coverage obtained in the nongroup market is anticipated to be younger, on average, than the mix under current law. Second, premiums, on average, are estimated to fall because of the elimination of actuarial value requirements, which would result in plans that cover a lower share of health care costs, on average.

Hmmm. Let’s translate this into English. First, CBO assumes that premiums will go up for old people, forcing many of them to drop out of the market. Since old people have expensive premiums, fewer old people means the average for the remaining pool will be lower.1 Second, AHCA policies will cover far less of your medical expenses, so naturally they’ll be cheaper.

The chart below shows how this “reduces” average premiums. If you use CBO’s projections and do a little arithmetic assuming a modestly younger pool, you get the average premium estimate for the overall pool shown on the left. AHCA is cheaper than Obamacare.

But the current age breakdown in the Obamacare insurance pool is 28 percent young, 38 percent middle-aged, and 26 percent old. What if you assume that stays the same? You get the premium estimates in the middle.

Finally, what if you assume that AHCA paid for 87 percent of your medical bills, just like Obamacare? Then you get the premium estimate on the right. 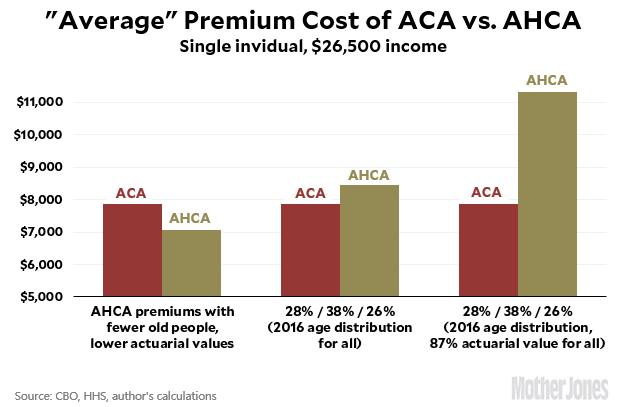 In other words, if you compare apples to apples, AHCA produces far higher overall premiums than Obamacare.2

Note that CBO didn’t do anything wrong here. They simply did their projections based on a (correct) assumption that AHCA would be too expensive for many old people and would produce crappier policies that had higher deductibles and paid far less of your medical bills. The “average” premium is lower, but obviously not in a way that helps anybody in real life.3

1Think about it this way. If a high school sends all its A students to a magnet school across town, the school’s average GPA will go down. This is despite the fact that nobody’s grades have actually changed.

2This is a fairly extreme example because the actuarial value changes a lot (87 percent vs. 65 percent) for the cheaper policies preferred by low-income folks. CBO has a second example that uses a middle-class worker, and it produces similar but less dramatic results.

3Hardly anybody, that is. If you’re young and don’t get any medical care, then the lower premiums really do help you.