David Frum is a conservative, but he grew up in Canada and lacks an American conservative’s instinctive revulsion toward national health care. Today he writes that maybe American conservatives should put aside their revulsion too. After all, the debacle over the Republican health care plan suggests that the public is unwilling to see health coverage withdrawn from millions of people. Democrats seem to have finally won the battle over ensuring health coverage for all, and that means Republicans can’t control costs by simply denying health care to anyone who can’t afford it. They have to figure out other ways to bring down costs:

Republicans have had too many competing goals in health-care reform. They have wanted to lower costs (to free fiscal room for tax cuts and military spending), but also to avoid tangling with entrenched health-care interests….What that money has bought is a huge and costly health sector….“Patient-centered medicine” sought to transform the user of health-care services as the system’s decisive cost-controller. Confronted with the full cost of medicine, the patient would consume care more prudently—or forgo it altogether.

That hope is listing badly. When and if it finally sinks, Republicans may notice something else. The other advanced countries with universal coverage manage to buy significantly better outcomes at the expense of 11 or 12 percent of GDP instead of America’s 16 percent. That extra increment of GDP could pay for a lot of military spending and a lot of tax cuts. Once politics has eliminated coverage reduction as a means of forcing economy, other possibilities open before a center-right party—and indeed have opened for center-right parties across the rest of the English-speaking world. Perversely, the effort to keep government out of health care has empowered health care to consume more and more government dollars. Where government has been deployed more effectively than in the United States, health care has consumed less.

I dissent in part and agree in part. For starters, it’s true that the United States has by far the biggest health care bill of any country in the world: 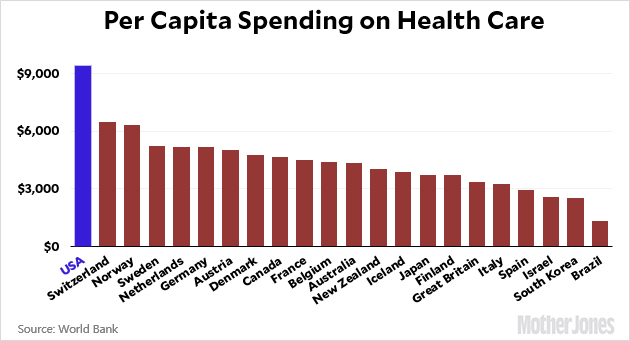 However, our costs are high because we pay more for everything: doctors, nurses, pharmaceuticals, hospital stays, etc. Politically, it’s impossible to adopt a system that would suddenly cut everyone’s pay by a third. If America were to adopt national health care, our per capita costs would almost certainly start out right where they are now: far higher than any other country in the world.

In the long run, however, Frum is right. It’s ironic, but it turns out that central governments are a lot better at keeping a lid on health care costs than the private sector. The reason is taxes. National health care is paid for out of tax revenue, and the public pressure to keep taxes low is so strong that it universally translates into strong government pressure to keep health care costs low. By contrast, the private sector is so splintered that no corporation has the leverage to demand significantly lower costs. Besides, if health care costs go up, corporations can make up for it by keeping cash salaries low. This is part of the reason that median incomes have grown so slowly over the past 15 years. Corporations simply don’t care enough about high health care costs to really do anything about it.

Over the course of a few decades, then, our costs would probably converge on the rest of the world if we adopted universal health care. Contra Frum, this wouldn’t open any headroom for lower taxes or higher military spending—government spending would still go up even if overall health care spending slowed down—but it would make the country a better, safer, more efficient place. What’s not to like?