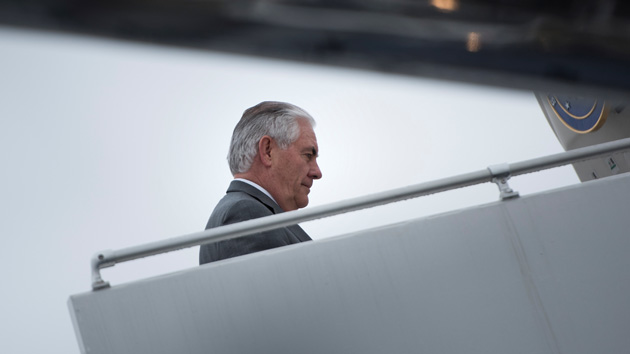 Donald Trump spent weeks trying to decide on a secretary of state before he finally chose Rex Tillerson—and then made it clear that he was partly motivated by the fact that Tillerson looked the part. And that was Tillerson’s high point. A big chunk of the State Department’s senior management team either resigned or was fired shortly after Trump’s inauguration. Tillerson wanted Elliott Abrams as his deputy, but the White House turned him down. He’s been notably absent from Trump’s meetings with world leaders. The State Department hasn’t held its daily press conference since Trump’s inauguration. Tillerson’s chief of staff is a Trump loyalist.

And Julia Ioffe writes in The Atlantic that it’s not just Tillerson. The entire State Department is adrift:

With the State Department demonstratively shut out of meetings with foreign leaders, key State posts left unfilled, and the White House not soliciting many department staffers for their policy advice, there is little left to do. “If I left before 10 p.m., that was a good day,” said the State staffer of the old days, which used to start at 6:30 in the morning. “Now, I come in at 9, 9:15, and leave by 5:30.”

…Some try to conduct policy meetings just to retain the muscle memory and focus, but, said another department employee, “in the last couple months, it’s been a lot more sitting around and going home earlier than usual.”

…Even the torrent of inter-department email has slowed to a trickle. The State Department staffer told me that where she once used to get two hundred emails a day, it’s down to two dozen now. “Not since I began at the department a decade ago has it been so quiet,” she said. “Colleagues tell me it’s the same for them.”

A lot of this, the employee said, is because there is now a “much smaller decision circle.” And many State staffers are surprised to find themselves on the outside. “They really want to blow this place up,” said the mid-level State Department officer. “I don’t think this administration thinks the State Department needs to exist. They think Jared [Kushner, Trump’s son-in-law] can do everything. It’s reminiscent of the developing countries where I’ve served. The family rules everything, and the Ministry of Foreign Affairs knows nothing.”

But you can’t do it out of the State Department either if you ostentatiously make it clear that the president has cut the diplomatic corps out of the loop almost entirely. Trump’s announcement that he wants to cut the State Department budget by a third is just the latest message of contempt from the White House. It’s completely bananas, and Trump surely knows that it will never happen. It was little more than a way to publicly belittle the State Department yet again.

I haven’t yet heard a persuasive explanation for exactly what Trump has against the State Department. He hasn’t treated any other department this badly. What’s the deal?