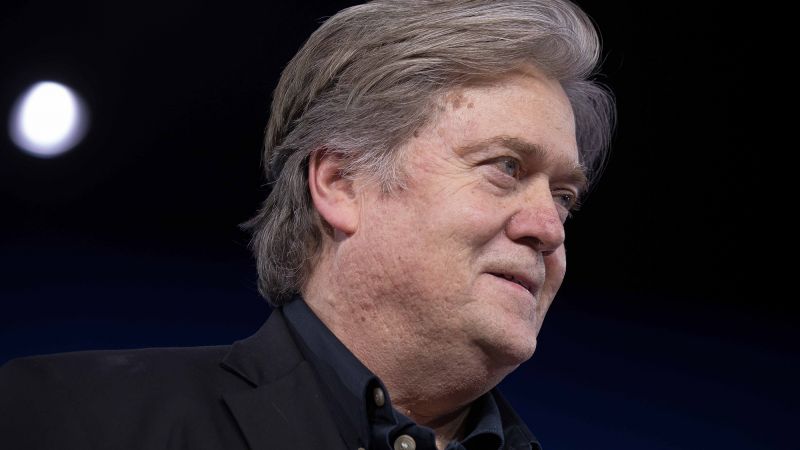 Over at the Wall Street Journal today, Michael Bender has a rare profile of Steve Bannon, focusing on how he became a sworn foe of globalization. It’s all because his father, Marty, lost his retirement savings when he sold his cherished AT&T stock at a loss during the 2008 financial crisis:

On Oct. 7, 2008, in the cramped TV room of his modest home here, Marty Bannon watched with alarm as plunging stock markets dragged down his shares of AT&T, the nest egg he built during a 50-year career at the company….As he toggled between TV stations, financial analysts warned of economic collapse and politicians in Washington seemed to mirror his own confusion. So he did the unthinkable. He sold.

Marty Bannon, now 95 years old, still regrets the decision and seethes over Washington’s response to the economic crisis….“That day, I found out how dumb the people were who I thought were smart,” he says. “They couldn’t control the situation, and it escalated during the day. I said, this thing is going so fast I’m going to be totally wiped out.”

Marty Bannon says he lost more than $100,000 because he sold the shares for less than he paid for them. It was a decision he made without consulting a broker or his family….[On] Oct. 6, financial analyst Jim Cramer told “Today” show viewers to pull money from the stock market if they needed any cash for the next five years. Steve Bannon says the warning spooked his father.

God knows I empathize with Marty Bannon. The 2008 financial crisis did indeed demonstrate how dumb a lot of supposedly smart people were. Still, something about this story doesn’t add up. Here are two charts showing the price of AT&T stock: 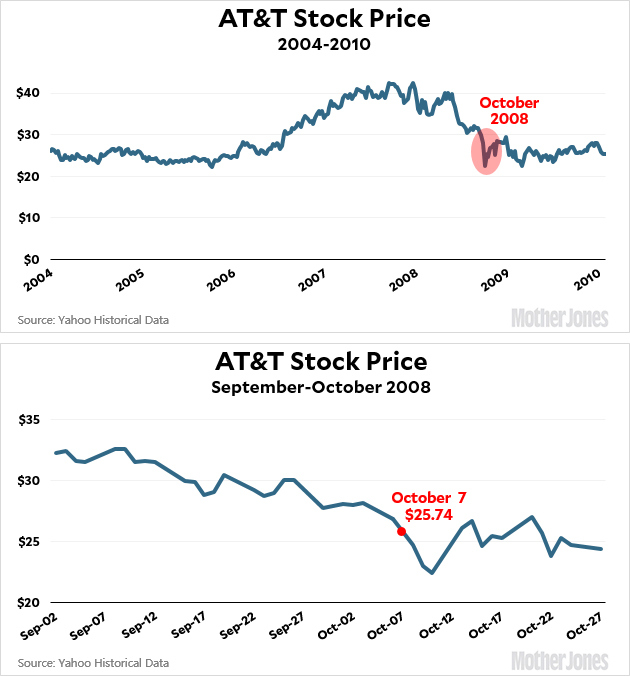 There’s no question that October 2008 was a tough month for stocks, including AT&T. Marty Bannon didn’t quite sell at the bottom, but he came close. AT&T closed at around $26 on October 7.

But that’s about the same price it sold at between 2002 and 2006. And it’s more than it sold for during Marty Bannon’s 50-year career at AT&T. If he accumulated AT&T stock from around 1945 to 1995, he would have ended up with shares in a bunch of local operating companies after the company was dismembered in 1984, and his split/breakup/spinoff-adjusted cost basis would have been—well, beats me. But by 2008 it couldn’t have been more than a few dollars. Unless he bought practically his entire nest egg during the 2007-08 boom or the dotcom bubble of the late 90s, there’s really no way that he posted a net loss when he sold, let alone a $100,000 loss.

I realize this sounds like a pedantic response to a retiree’s loss during the financial crisis, and I wouldn’t bother with it if it weren’t being offered as an explanation for the political views of one of the most powerful men in America. But the fact remains: AT&T stock fell during 2008, but only to where it had been in 2006. Anyone who bought AT&T stock during the aughts would have broken even selling at the bottom of the crisis, and anyone who bought their stock during the second half of the 20th century would have made a big profit.

Beyond that, it sounds like Marty Bannon was a victim of Jim Cramer, not the US government or even Wall Street. And what does globalization have to do with any of this anyway? Blame for the financial crisis lies with the mortgage industry, the derivatives hotshots on Wall Street, and the Bush administration for lousy oversight. But that’s about it.

So what’s going on here? This is a tear-jerking story from Steve Bannon, but it doesn’t explain why he suddenly became a sworn foe of globalization, immigration, trade deficits, and Islam. What’s the real story?