The New York Times reminds us today that the eurozone’s debt worries are still with us:

Even as global stock markets climb, worries are building among investors that long-simmering debt troubles in Greece and Italy will put additional strain on the euro….The result has been a sell-off of European government bonds as investment funds reassess the risks of holding such securities. In Italy, for instance, some hedge funds are making direct bets that the prices of Italian bonds will collapse.

Italy’s debt as a share of its economic output has risen to 133 percent from 123 percent during that period. In Greece, debt has increased to an expected 183 percent of the country’s total economy from 159 percent….And with Italy and Greece held back by the fiscal constraints that the euro’s rules require and not expected to generate sufficient growth in the future, the only alternatives are a restructuring of debt or an exit from the common currency.

Ah yes, either debt relief or massive austerity or exit from the euro. But the two primary funders of the ongoing Greek bailout, Germany and the IMF, don’t agree on which it should be. Here’s the Wall Street Journal:

Germany and the IMF share an extremely low opinion of the quality of Greece’s political class and institutions. But from this they have drawn different conclusions….Berlin will keep funding Athens, but it wants to maintain leverage over the country’s economic decision-making to protect German taxpayers.

But the IMF sees this as a recipe for perpetual can-kicking fundamentally at odds with its own institutional priorities….The IMF’s credibility has already been battered by one failed Greek program and is determined not to be sucked into another. For the IMF, therefore, this Greek program must be the last—and given its extreme low confidence in the Greek political class, a program is unlikely to be successful without very substantial debt relief.

Germany wants a decade of austerity. The IMF considers this to be a fantasy and wants to face reality square on: Bite the bullet and write off a big chunk of Greece’s debt so they have at least a fighting chance of kickstarting growth and becoming solvent again.

I don’t have much to say about this, aside from the fact that as long as the eurozone’s core countries continue to run big capital outflows and eurozone monetary policies continue to favor those core countries, there’s likely to be steady stress on poorer countries in the south who are stuck using a euro that doesn’t really fit their needs. 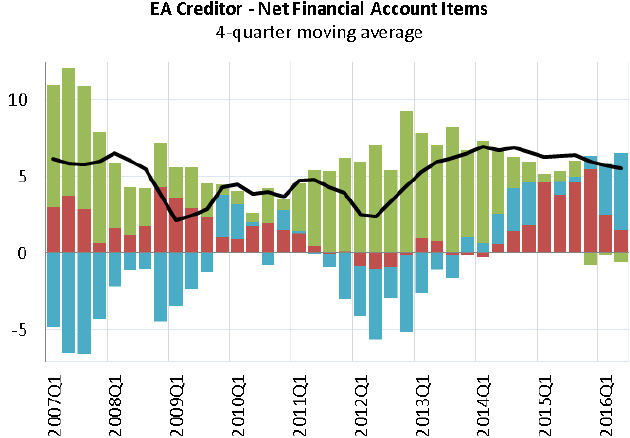 As long as these outflows don’t turn into big inflows in the south, everything is probably sustainable. But how long can that stay true? I’m not sure, but it still doesn’t look as if Europe is dealing with its fundamental problem of trying to maintain a single currency and a single monetary policy for a set of very different countries.

Mainly, though, this post is just a reminder that Europe is still quietly struggling with its economy. For the moment, their crisis is under control. But then, it always is until suddenly it isn’t.